Since the debate around gyros started, almost 2 weeks ago, we were all focusing on the various category specific sections, as mentioned in Tomas’s email to CIAM delegates. It is obvious that these rules were everything but clear. A rules which is subject to interpretation is a bad rule …

But while debating/fighting we just missed another general section (pointed by Tom Kiesling and Mike Evans) that describes the categories included in the F3 category (Radio Controlled Flight).  And in this section, one sentence says it all as you can judge by yourself.

This is a flight during which the model aircraft is manoeuvred by control surface(s) in attitude, direction and altitude by the flier on the ground using radio control. 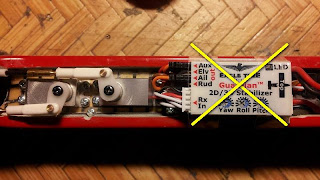 And here, this is explicit. Any device able to actuate control surfaces independently of the flier is forbidden. So gyros, stabilization systems, autopilots are prohibited.

It is good that we finally clarified the situation that was very unconfortable from my point of view. It will be easier for the CIAM sub commitee to do a clear recommendation.
- October 11, 2013