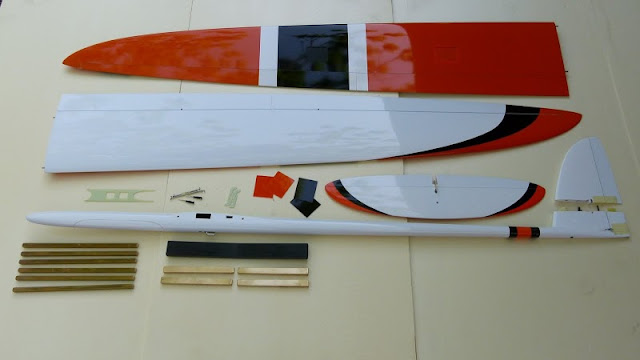 I'm a very lucky man as I received the very first Needle 115 (except the prototype of Thuro). This is a preproduction model in the sense that the fuselage is the original one with removable upper fin, a one piece tailplane, and a fuselage moulded in 2 piece. This will be changed soon to a more standard fuselage as the current fuselage is harder to produce. The Needle arrived in a very well packed parcel, everything was solidely secured, so normally no damages could happen.

The Needle 115 is the intermediate model between both famous Needle 100, which is a super fast model in medium to strong condition, but handicaped by it smaller size, and the Needle 124 who desmonstrated to be very competitive in F3F, but sometimes too large with its 3.15 wingspan. The Needle is the new kid on the block, who will fill in the gap between the 2 other Needles.


How does it look ? Esthetically speaking the new Needle 115 is mixing the wing shape on the Needle 124 with the Needle 100 like fuselage, but with a larger fin and tail, which makes him better proportionned visualy. The fuselage is 2.4Ghz Friendly, with plenty of kevlar in the front part of the fuselage. The rear boom of the fuselage is very rigid and strong.

Moulding quality is absolutely superb, shiny finish, prefect details, the wings come together on the fuselage with no hard point with the joiner, and fit perfectly on the root of the fuselage.

No fuselage ballast, everything is in the wings or in the joiner. I took the brass ballast set option which weight 2.288g (Wing Ballast: 1445g, Joiner Ballast: 843g). With this set all the wing compartiment are not occupied. The front compartiment can accept shorter slugs. I will look at the ballast distribution soon, by using my spreadsheet that I will modify for the N 115.

Weight of each Component  is as follow:
Total empty weight: 1643g

I let you look at the pictures of the kit I took yesterday. It is now the time to start the assembly. Stay tuned !