The White Stork and the Shadow, the video

Olivier Bruni (Passions Aero) just posted his video, filmed the same day than the picture album posted few days ago. The secret of this story is that Olivier is in charge of the inventory of the white storks in this area.
The video shows very well that birds are not disturbed at all by the RC sailplane. It would be good to show this video to the ecologist-extremists that often (always) claim the opposite !!!
Anyway, thanks Olivier for sharing with us this magic instant !

What a spring season !

This week end was the local F3F competition, part of the french league (Notre Dame de Vaulx). Despite the very bad weather forecast, some pilots came from far away (Auvergne, Alsace) hoping to fly anyway.

Thing were clearly annoucing very bad, as friday evening when the clouds cleared, we could see from GRenoble the mountain totally white with 5 to 10cm of snow on it. In the night of Friday to Saturday, more snow falled.

Saturday morning, it was impossible to reach the parking at the bottom of the slope, as there was too much snow on the road. The pilot meeting therefore moved to the village below. after some discussion, we finally decided to try another slope close to first one. After a fist attempt on the main slope, we discover that the wind was too crossed to fly, so we continued to walk to a mini summit facing the north, not ideal at all for F3F, but however fliable.

Under a threatening grey sky, we installed the pylons, and flew a first round (best time 40s). We started the second round but quickly had to stop when the snow decided to fall again. Temperatures were freezing. some drop of water went to ice on the wings, while putting back the plane in the bag. OK, we are crazy, I know !!!!

Now the question was, what to do the next day to ensure we could fly more and validate the contest (4 rounds needed, given  the 14 pilots presents). We decided to move the contest 60km to the south, near Gap, to retrieve the sun and the wind.

On Sunday, we arrived at the parking around 10:30, climbed the slope and installed everything, then resumed the contest with round 2, under a blue sky, but still freezing temperatures, especially becuase of the strong wind (8 to 13 m/s).

We managed 6 new rounds, in superb conditions, with some thermals. Best time is 34s by Alain Galinet with his Alliaj HM. Lot of sub-40 has been flown. The only drawback of the slope was that the landing area was behind the course, so we had to wait the landing of the pilot before to launch the next pilot.

We finished around 3:00 pm with a total 7 rounds in the pocket. We all had a great day on this slope, that we need for sure insert in the calendar of the french league for next year.

Thanks to the organisers for making this contest finally possible !

The White Stork and the Shadow ... 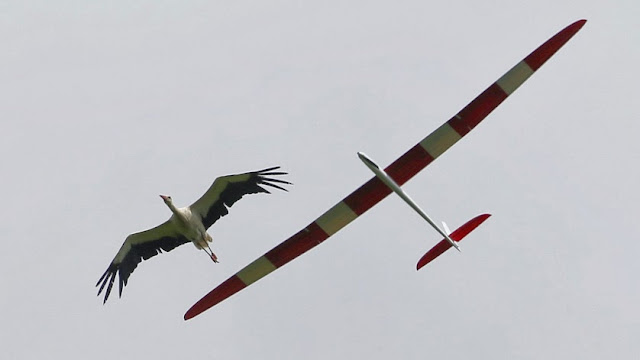 This superb and magic pictures from Olivier Bruni has been taken during a shooting session of his E-shadow from NAN models. According to Olivier, White Storks live in his area (south west of France), and it is not unusual for him to fly with some of them.

You can retrieve the entire photo album HERE, with plenty of stunning pictures. Olivier has also a very interesting blog "Passions Aéro" with nice video, articles, and news.

Olivier told me that he is preparing a video of this E-shadow flying session. As soon as the video is released, I will share it with you.

Thanks Olivier for capturing this moment of grace and beauty, and sharing it with us !

A nice video from Adam Bury about the F3F Spring cup in Poland that was organised last week-end. You can also find many pictures at the following URL: http://www.f3f-klif.pl/2013/05/puchar-wiosny-f3f-2013-rozegrany/

An afternoon at Puy de Manse

Spring continues to be very bad in France with lots of rain, water flood here and there, cold temperature. Weather forecast even plan some snow next week-end ! Hopefully, time to time, there is one or 2 consecutive beautiful days. Last saturday was nice, so I decided to drive to the region of Gap to retrieve Serge and Arnaud there and enjoy some super conditions at Puy de Manse.

Serge had his brand new Stinger he maidened, Arnaud was flying his Vampire. I took my Pike Precision, and didn't forgot to take my GoPro3 and also the Keycam #16 V2 lens D  to shoot some onboard and ground video.

I had about 30 minutes of onboard video before the battery of the keycam dies, plus some Go Pro sequences, so I edited the 6 minutes video below. Hope you will like it.

Usually flying in the southern Alps always means sun and wind on great slopes. This year, weather forecast was really optimistic for saturday with some strong north wind (Mistral), and possibly some south west breeze for the sunday. It was also the opportunity to discover a new slope that we have never flown before.
Unfortunately, weather didn't keep its promises. When we arrived on the north slope we had no or very little wind. the slope is very deep and offers a beautiful scenery. We waited until 2pm, discussing, laugthing, but also free flying. I had a very interresting free flight, when after few minutes without thermal, I finished very deep with my Pike Precision hoping for a thermal. It has been a long and scary wait before I found a first thermal very far, almost out of sight. I finnaly found a second then a third thermal, thanks to Matthieu and his Solius (electro glider) who indicated me clearly the lift.


Around 2:30pm, the wind reached 3 to 4 m/s so we could start the F3F contest. Conditions were very variable with some time difference between 10 to15s for the same piloting level. We continued with round 2 and 3 before the wind died slowly at the end of round 3. What is very funny is that at 20km from there, the wind was blowing strongly all the afternoon.

Sunday has been worse has the wind was totally absent, and we got some rain, so the organiser decided to declare the contest end around 1pm. Overall this edition was a bit disappointing, but I'm sure next year will be a great contest, as it has always been in the past.

Below is a video filmed on saturday that will give you a good overview of the contest, the place, and the flying conditions.

Sederon 2013 from Pierre Rondel on Vimeo. 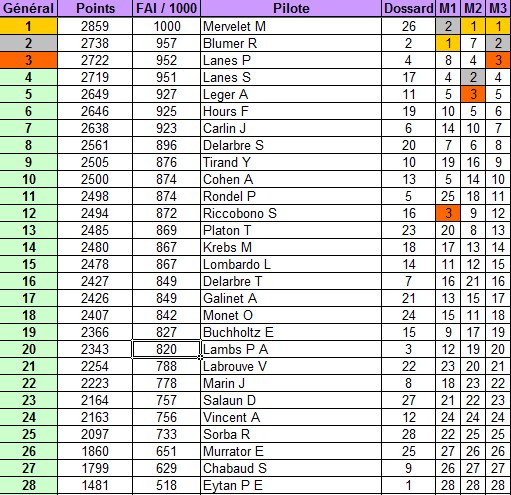 Here is a short video while practicing F3F on Laurac Slope B (VKR2010 slopes) and also flying some DS. The Needle was at around 3 kg with ballast. Conditions were very bumpy frontside and very turbulent back side.

The pyrenees cup is organised every 2 years in alternance with the Alpine cup in Briançon. Being end of April, we were expecting the weather to be cooperative, especially because few days before we got sunny weather and very nice temperatures. But unfortunately, a strong depression and rain crossed Europe over the week-end.

I arrived in Laurac on Thursday for some practice. We had the last day of beuatiful weather with Autan wind (south east). We have been able to fly all the afternoon, do some DS, some F3F practice, with the other pilots presents. Wind forecast was tramontane (Noth West) all over the week end with a switching during friday.

for those who don't know this region, there is mainly 2  winds in this part of France: Autan and Tramontane:

The Autan is caused by high pressure moving NE from the Azores or the Eastern Mediterranean to the Baltic. Starting as a damp maritime wind, the Autan is blowing over the Languedoc into the Aquitaine, channelled and intensified by narrowing of lowlands between the Montagne Noir and Pyrenees and undergoes sudden acceleration between Corbieres and the south of the Massif Central.

Both wind can be strong so are good for F3F :)

Friday, we arrived to St Ferriol slope. Sky was grey, and the wind inexistant. We spent the day discussing, flying electro foamies, or quadricopters. We were also following carefully the evolution of the forecast, and it was not really encouraging for the 2 next day. On Saturday, forecast was saying that the rain would stop at the end of afternoon, but with good wind, and on Sunday we could expect a dry day, but with low and cross wind.

The organisation decided to setup the course to do the first flight of the compeitiont around 10am on Saturday, just in case. In fact we waied until 12:30 and suprisingly, the sky cleared, so we have been able to start the competition around 1pm. In fact we got a 5 hours window with no rain to few drops only, good wind between 8m/s to 15m/s with some gusts reaching 17m/s. All day long we had the company of up to 20 vultures flying in the lift, not disturbed at all by the F3F gliders whistling close to them. We managed 7 rounds before the wind shift to north, so too crossed to continue the competition.


After 2 average rounds, I changed gear and followed Matthieu closely, even winning 2 rounds, and flying the fastest time of the competition in round 6 with a nice 33.14s thanks to my Pike Precision loaded with 1.4kg of ballast. Martin Newham (UK), flew his Fresstyler 4 very well to end in third position. Reto Blummer (Switzerland) was waiting in ambush, and ends in 4th position, and Laurent Lombardo in 5th.

Video of the Fastest time:


Saturday evening, we all finished in Limoux for the banquet, hoping some more rounds on Sunday, despite of the low wind announced. On Sunday, we stayed on the slope, under the ligth, then stronger rain until 1pm, before the organiser decides to end the competition and invit everybody to the price giving in the nearest village hall.

Finally we can say that this competition has been short (5 hours only) but intense and we all had great fun. A big thanks to the organiser (Andreas Fricke) and his team who welcomed us with croissants and coffee on the slope, and ran the competition very smoothly.

Results and evolutive ranking (round results can be found here: http://pyreneescup.blogspot.fr/) 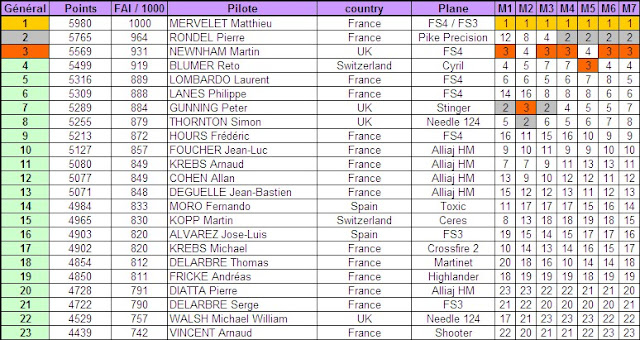 Here is the video I did about the Shark XL. Sorry for the lack of light. Weather was very bad, with dark grey clouds, but hopefully no rain at that moment.