Yesterday, I joined Yves, Paul, Christian, and Etienne to discover and fly a new and very promising slope in Ardèche. The area has been recommended by Paul, after  an intensive search on the internet, I discovered the spot on geoportail and google earth, and Yves found the place and the road/way to reach the slope.

We arrived at the slope around 11:00. the wind was already established and was growing. I flew my Needle 100 at 3Kg all the time.

This new spot is just exceptional, a small cliff facing north, reachable after a 20 minutes walk. The landing zone is behind at 200m of the slope, without any turbulence or rotor.

I really enjoyed this new slope a lot. In addition to the south slope which is of the same quality, the next league event in 2014 will be a must in the calendar ! According to Yves, he will apply to organise the nesxt national championship there, which is even better !

I propose you the following video with my Gopro and an onboard cam.

Discovering a new F3F spot from Pierre Rondel on Vimeo. 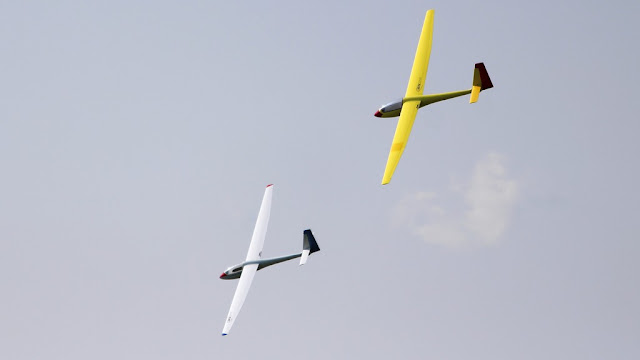 Last Saturday at the slope of Corps, I met with 2 jazz pianists by profession, Alfio Origlio (one video here) and Olivier Truchot (video here). I know already Alfio for few years and did some shooting session with him in the past: For example the back cover of RCSD few months ago. Anyway, Alfio and Olivier are also modelers, and passionate by RC gliders. Every year, they come to Corps for few days, doing camping in the valley and coming on the slope every day. This time, they both came with a 4 meters ASW 15 from Airtech. At the end of the afternoon, they decided to do some patrol flying in front of my camera lens, so the present picasa photo album :) It has been a great moment, with some very close flying, some desynchro ;-), but also some magic moments close to the perfection, like during a duet live performance. Thank you Alfio and Olivier !

Here is the video filmed last Satuday on the slope of Corps:


Soaring on Heaven ! from Pierre Rondel on Vimeo. 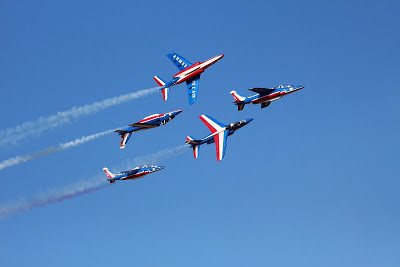 Ok, this is a bit out of subject, but I wanted to share with you this photo album I took last sunday at the air show of Valence chabeuil. This yearly meeting always display great planes, warbirds, jets, aerobatic planes and of course ending by the show of the french aerobatic patrol. The air field is perfect for this airshow, as mountains are far. From 11am to 7pm, under 31 to 32° celcius and sunny sky, we could see a Mustang, a Yak, Zero, a T6, a T28, Bronco. Gliding was represented by a short aerobatic program with a Pilatus B4. Then we also could see a round of the Free Flight World Masters with 7 planes/pilots doing a 4 minutes aerobatic program. At the end of the afternoon we saw the Rafale jet fighter. The guy took of on purpose with the wind in the back using the post combustion, then did an incredible demo, tearing the air literally with the Snecma M88 twin engine, flying very slowly at high incidence thanks to the avionics and gyros. But the end of the air show was reserved to the french aerobatic patrol which celebrate its 60th anniversary in 2013. Their program has been unbeliveable not only in term of piloting capabilities, but also how their show is articulated in the space and timing. After few flyby in patrol with 8 planes they splitted and occupied the entire volume. As soon as a manoeuver was finished, another one by another group or pair of Alphajets took place. No time to breath, it is just magic ! They drawed an heart with the cupidon arrow in the sky, before to do a last flyby to say "bye bye, see you next time!", then landed, in patrol. Really an unforgettable moment, despite I saw them multiple times.


During the day, I took not less than 2944 pictures and video to obtain a picasa album of 175 pictures after a long selection of the best shots. Enjoy ! Later will come a video, but I have some editing to do for now.

Another great afternoon in Corps

Last saturday has been another great flyin session in Corps with lots of people and famous pilots suach as Roland Stuck, Philippe Gintzburger or Pierre Emery.

It has been alos my first attempt to film with my EOS 650D equiped with a LCD viewfinder. This device is connected to the back LCD screen and works like a viewfinder, with an excelent definition and confort. This is mandatory to film in exterior as the optical viewfinder in useless because the DSLR mirror is "up".

I need some time to prepare the video, but the result should be quite nice, I think.

On sunday, I took the opportunity to have many helpers on the slope to experiment a smoke system on my Pike Precision. The reason behind is that I'm preparing an Air show that is end of september, using EPP jet plane with propeller, and I wanted to try this model of smoke cartridge on a larger model first. To do so, I build removable cartridge mounts. They are made of a 32mm water tube support and 2 epoxy plate (1mm thick). The 2 plates pinches the wing tip of the wing, and are secured with strong duck tape. The cartridge is just inserted in the mount, and doesn't move.

The Smoke cartridge are from http://www.bjornax.se. I bought 2 different cartridges. The AX-18 and the larger model, the AX-60 as I don't know which one is the most convenient for the application. This time on the Pike, I used the AX-60. It provide about 4 minutes of smoke which can be white or coloured.

The flight went well, but at the end of the flight, I discovered that the cartridge melted partially because of the heat dissipated, wow ... hopefully, my mount was putting the cartridge far enough from the wing tip to not damage it .

On Sunday, I returned to Corps to show the slope to my visitor from Quebec, Marc Alain. Our surpise has been to meet lots of other pilots from the club, and  nearby clubs of the area. When we arrived at the car park, the slope what still "the head in clouds", but we knew that it was a matter of time for the sky to clear, and enjoy the afternoon, what we did, with plenty of different planes from the Alula to the Alpina 4001 (now a collector, as Tangent is very slow to restart its activity), without forgetting some aerobatic gliders, or semi-scale models. Overall we spent a very nice afternoon with plenty of relaxing flights, thermal hunting.

Last week, Marc Alain from Quebec, arrived from Paris by train with his sportube and few gliders to visit the slopes around and try the now famous slope paradise that I advertise all year long ! But again, this was without counting on the weather that decided for the last week-end of June to return to winter, at least on Saturday !!!! After looking at the weather forecast for tjhe 2 days, we decided to drive to Gap to escape low clouds and rain. Along our way to Gap the sky progressively cleared and we reach the slope to discover plenty of wind and dry weather. The day has been under the sign of the speed, given the very nice and strong conditions with 8 to15m/s during all the afternoon. I probably did 200+ F3F laps, with up to 1.4 kg of ballast in my Pike precision. Other planes were Sniper, Vampire, Ascot, Shooter, AlliajHM and a Shadow. A very nice and busy afternoon that, I think, Marc Alain enjoyed a lot!