This is the ideal light weight tool you need when you are at the slope or at the field and want to set properly the CoG of your sailplane. I made it using a paper ruler from Ikea , a 0.5mm epoxy plate a plastic control rod sleeve and 2 small piece of 1mm plywood. The paper ruler is bouble taped on the epoxy plate, the red plastic control rod sleeve and the pywood are glued with some. Using it is quite simple. Just tape the ruler on the uderside of the wing at the rigth position. Then position your fingers on the red control rod sleeve and check the balance, then add or supress lead accordingly. I used it yesterday on my Needle V115 and it worked perfectly ! I estimated the precision around 0.5 mm.

Next time I will teach you how to make a 4K TV set using a paper-fastener and a chewing gum  !!!!! 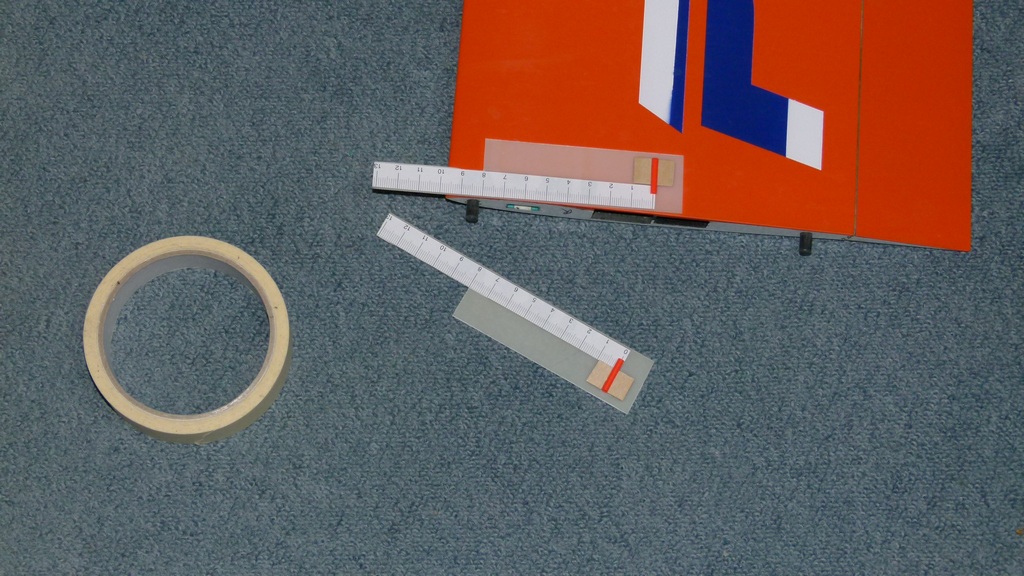 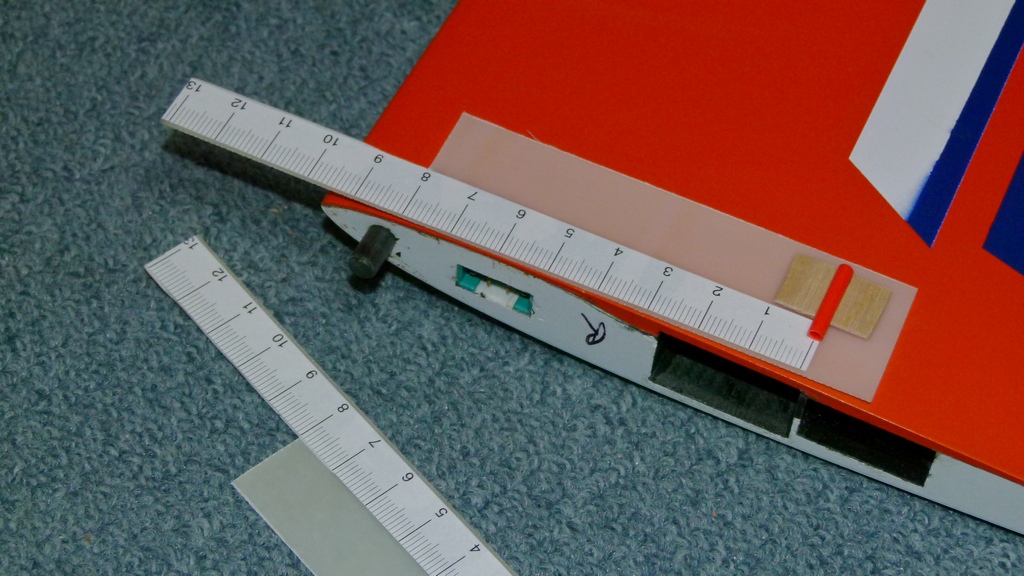 Description: Gildan G2400 long sleeve t-shirts are made of 100% preshrunk 6.1 oz (205g/m2) Ultra Cotton and have double-needle stitching throughout. 100% preshrunk cotton, Double-needle stitching throughout, Taped shoulder-to-shoulder, Ribbed cuffs. Color carolina bue (detailed information here ).  The price is 17 euros (shipping cost NOT included). You can preorder it at the following URL:

Thanks in advance for your interest and precious support !

One more front cover picutre from Planet-Soaring on the latest issue of RC Soaring digest, you can download here. 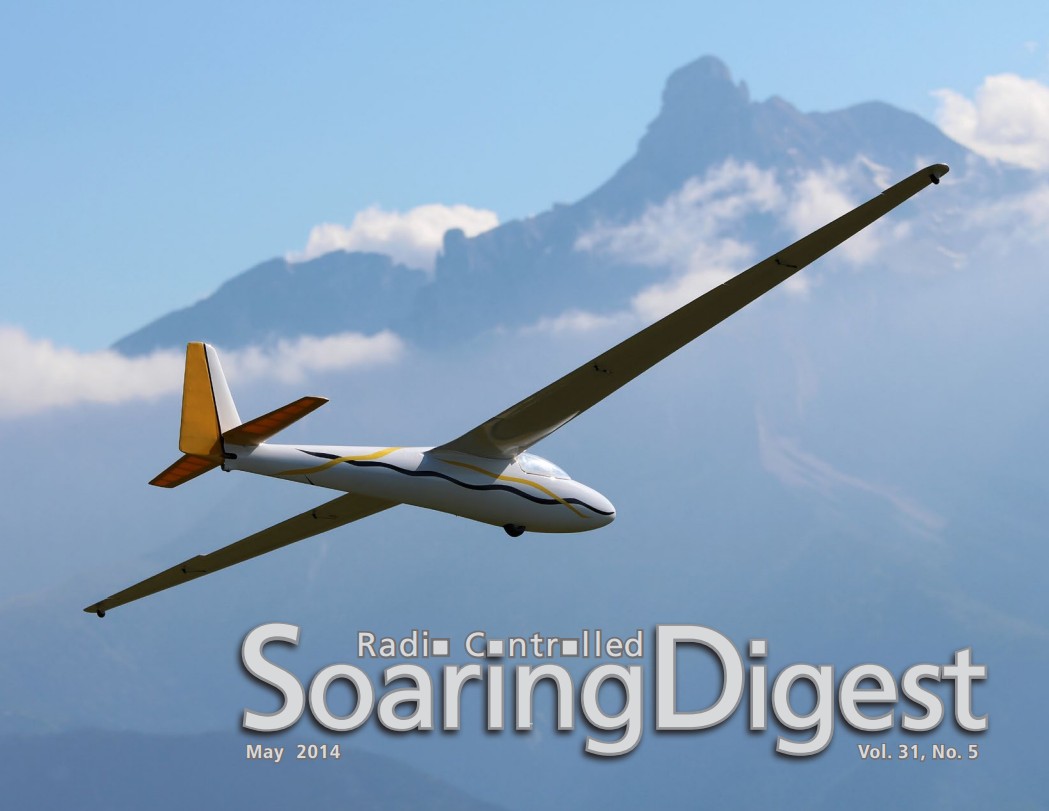 My review of the Libelle from Dream Flight has been published in the May issue of Modèle Magazine:

Easter means for me "La Muela" since 1995 ! As the date is alternatively beginning of April or end of April, we can have differences in term of weather and flying conditions. In 2014, it was very late so we could expect sunny weather and cool temperatures. But we got also 2 calm days with no to very few wind. Hopefully the contest is now on 3 days so it is easier to manage some rounds.

On Thursday, the program was "Fare niente", sun cream but also sun burns. the thermal wind played with us, turning around the hill all day long. We could however enjoyed some thermal flight, HLG session, and plenty of discussion here and there.

Friday started the same, so people started to be a bit worried about the possibility ro fly over the week-end. End of afternoon, we started a first round on the south slope that has been interrupted then cancelled after 5 or 6 pilots, as the wind shifted to the west slope. So we moved and started again round 1. finally we could complete 2 rounds there, finishing around 7:45 pm.

Saturday has been much better. The wind started to blow end of the morning, so we could start news rounds around midday. We have been able to achieve 7 additional rounds with a best time at 33s (Aubry Gabanon). Matthieu Mervelet won the competition for the second time in a row, followed by Sebastien Lanes and Andreas Fricke.

On my side, after 2 very bad rounds on friday (one is my fault, the second is because of the start order, flying at the very end of the day with crossed wind and decreasing wind speed), I couldn't pretend to be on the podium. However, I did a good climb on the last day, with no major mistakes.

Organisation did a real good job over the week-end: efficient logistics, quick decision, extreme reactivity and adpatability to ensure we could do the best from the weather conditions. They ran the competition very smoothly and have been warmly thanked and applauded at the price giving. Again a big thanks to the organising team (Torra Miguel Jr, Roberto Polo, Charli Sanz, Carlos Ruano G, Alvaro Sampe, Miguel Medina, Inigo Herrera, Miguel Torra, Gerardo Plazza). I will come back for sure !


Below is an excellent video from Aubry Gabanon about La Muela Eurotour F3F. It summarizes very well the week-end and gives a new perspective of the slope.


Full results can be found here

Panat, near Rodez was the first competition of the season 2014 of the french league. Sunny weather and some light wind made the week-end very enjoyable. The hosting by the local guys has been just incredible, and I will never forget the excellent banquet on saturday evening. I flew my Needle 115 with the new light fuselage and tail at 2.2kg, empty (no ballast).


Here is a video filmed by Aubry Gabanon with his TBS discovery quadricopter giving a different point of view of the place:

Excellent F3F practice session last week-end with my national team mate Frederic Hours. I flew my pike precision after a technical problem on my Needle 115. Fred flew his Stinger and FS3. We had between 8 and 10 m/s of wind straight into the cliff, so very good lift, with time to time some thermals.