Eric Johnson recently published on his VTPR blog the first information about what could be or become a VTPR contest, trying to define a new format and some guidelines, with the ambitious objective to keep fun but inject also some rules and challenges to take VTPR at the next level and make it to progress. 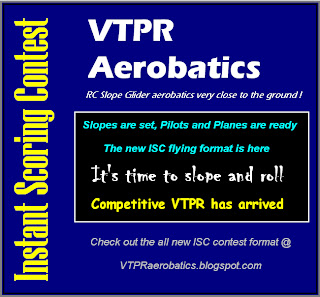 You can find all details on the following URL: http://vtpraerobatics.blogspot.fr/2012/09/instant-scoring-vtpr-contest-interface.html.

Eric posted also some video to better give an idea about scoring:

The Coupe Icare is the world’s biggest paragliding and air sports event, bringing together pilots, manufacturers and free flight professionals of all sorts, passionate amateurs and curious onlookers for the most fun, flying festive event imaginable. http://www.coupe-icare.org/

I participated for the second time to the aeromodelling air show, letting my F3x at home and flying instead foamies. We organised pylon racing demo with Merlins (MPX), and Kinetics (HK). We have been using X-games pylons made from ripstop nylon and heavy nylon for lowers parts. This is really a great accessory, installed in less than a minute, looking really great.

This year we also built special model to do the show: 4 Skymans (Ironman, Spiderman, GreenlLantern, and Batman). They had lots of sucess with childrens.


My clubmates did also some patrol flights with 2 Corsairs and 3 P38 Lightnings. This event is huge, extremely well organised and showing many different activities going from aeromodels to hot balloons and mny other things.
- September 26, 2012 No comments:

I maidened my Schwing 88 the previous week-end, and I have been able to do nice shots to share with you all.

The Schwing is very good in the air. Nice looking, agile, light, on rails.
I started with the recommended CG at 99mm the first day, but found it was too backward because the plane was too sensitive to the camber variation. After adding 10 to 15gr of lead, I'm probably between 97 and 98mm now.

I flew around 2 hours with it the day after. The schwing is excellent in academic aerobatic because it tracks very well. Vertical manoeuvers are large and nice, you can control it at any time to apply the necessary corrections.

But its agility allows also to fly low and close. The roll rate is just great ! You don't need to prepare to start the roll, you just do it as you feel it.

The stalled rolled is also impressive, but requires some height because the plane needs 2 to 3 rotations before to get some grip again and exit safely.

In my setup, I used snap flaps DOWN, but also UP to have more elevator authority when flying inverted.


The crows work very well. The second day, after schwitching of transmitter, I did a mistake on the crows, putting some ailerons down (8 to 10mm) instead of up. surprisingly, the behavior was even better than with normal crows. the plane slow down very very well, takes a down angle, but remains extremely stable and ailerons are very efficient. A setup to explore more from my point of view.

In brief, I really enjoy the Schwing ! It is very compact plane to transport, looks like a larger plane at the sticks and give lots of satisfaction and pleasure. I definitively need more flying time to enjoy it even more.

I have tons of video sequences to make a very nice video clip with plenty of actions. But I will need some time to do it, as I'm leaving for the F3F world championship soon.

A big thanks to Joël and Guillaume who helped me with the camera during the 2 days.
- September 26, 2012 2 comments:

Last time I let the Schwing very close to the completion. First of all, I glued the green MPX connectors in place. I usually do it with the wing mounted, so I need some release agent here and there. Once the servos connected to the harmness, I used Samba transparent servo covers to close the servos bays.

Then I completed the installation of the elevator and rudder control rod, using MPjet M2 coupler. I needed to use a ball clevise for the elevator because of the shape of the DS6100 servo. I spent some time on the balance because I made a mistake with the servos tray installation. It is installed too forward which reduce the space for the lead to achieve the right CG. In front of my 1500mAh NiMh battery, I have been able to put only 70gr of lead., then about 50g on top of the battery. As I didn't have remaining space for more lead, I ended byt putting the rest of the lead in front of the canopy. I have a total of 190gr of lead to get the right CG at 99mm, as recommended.
I used a 6 channels RG631B, without its satellite (still needed for binding). The 2 antenna are located at 90°, first one at the bottom of the fuselage, the second one is vertical, in a plastic tube maintained vertically by the servo tray.

I started few days ago the assembly of the Schwing 88 from sloperacer.co.uk. Overall, everything went well for the moment. No surprise, only smooth step by step building.

The main work consists in gluing the ballast tueb and the servo tray in the fuselage. Before this operation, I prepared the ballast tube. I used some  3mm plywood as tube end stopper. After cutting it at the approximative diameter, I made a hole in the center, then fixed it on my mini-drill and sanded it to obtain a perfectly round piece, at the exact diameter. I glued it in place with some expoxy, then installed a 2mm carbon rod in front of the stopper, piercing the tube side to side.A small piece of hard foam is inserted in the tube to act as a shock absorber.

I then glued the servo tray in place after sanding the inner side if the fuselage to improve fixing. I used 10 mn rapide epoxy first. Then I applied some fiber class going from the tray to the fuselage side in order to perfect the fixing. I always do this on my plane and have never been disapointed. This is very robust !

The next operation is the most tricky. As the fuselage is thin, and well occupied with the ballast tube, the routing of the wires from the roots to the receiver is a bit challenging. I finally proceed by starting from the receiver side, routing 2 cables on each side of the ballast tube till the connector location.

As there is no thickness at that place to improve the fixing of the green connectors, I did a small wood plate going from one side to the other side, inside the fuselage, and glued with rapid epoxy. I proceeded to the soldering of the wires on the green connectors. when secured with some hot glue, I epoxied the connectors in place, on the inner wood plate. The wire are then pushed in the fuselage along the ballast tube, and to finish, a piece of hard foam is inserted behind the joiner holes to avoid the wires to move. I forgot to say that I had to enlarge a bit the connector holes. The height was fine, but they weren't large enough. Not a big deal.

After evaluating the 2 approaches (elevator servo in the fin or in the front, on the servo tray), I finally choose to install the servo on the servo tray for accessibilty and maintenance reason. It is also true that my exemplar arrived with the bell crank already installed and without elevator servo bay in the fin. Commands are made from carbon rod, so I used MPjet brass coupler and MPjet plastic clevise for the rudder. I will use the same on the servo side.

Let switch to the wings:

After locating the exact position of the servo arm to be aligned with the control horn, I glued the modified MKS 6125-mini wood servo frames in place with rapid epoxy. I use the 6125-H instead, but the servo frame aims to block the servos horizontally. Then, I glued the servos in place with the servo arm at the right position to have an asymetrical movement for the flaps to obtain the correct deflection in each direction up/down for both flaps/ailerons.

Control rods are made from M2.5 threaded rod and 2.5 metal clevises. On the control surface side, I have to grind the top of the clevises because they were touching the command exit skin. On the servos side, I also grinded the metal clevises to connect them of the first hole of the arm and still allow some movement. The clevises are then immobillized on the threaded Rod, at the exact length to suppress any slop. Once connected to the servo, it give very tight command with no slop.

I then prepared the servos harmness for the wings using MPX green plugs and universal connector, crimped. After soldering the 6 wires (2x3) to the MPX connector, I used hot glued to immobillized everything.

Not much to do to complete the assembly.  On the wings, I just need to glued the green connector in place in the root, then close the servo bay with covers.  on the fuselage, I will finish the control command on the servo side in the fuselage, complete the radio installation with the battery and the receiver and proceed to the balancing (at the very end).

A nice video from Pgts featuring his ultrabatic depron glider called "The Poisson", a glider based on "Le Fish" . It is 1.2m wingspan, and weight 315g.

Two excellents videos from Noisyskies has been released. They are my reference in term of video filming and editing. They clearly masterise it !!

The first video is about the F3K Eurotour in Nancy four month ago , with original view angle, slow motion sequences.

The second one, showing a flying session with an Espada on the slope of Macon. On this one, Noisyskies played with color visual effect, with slow motion, and a perfect synchronisation with the soundtrack

The 2012 edition of  Le col du Glandon F3F constest has been a bit challenging this year. When we arrived at the car park temperature was 2° celcius, and we spent saturday on the parking to wait for the sky to clear, but this never happened. We left around 4pm with 4° ...

Sunday, hopefully the sky cleared during the night and we arrived around 10am with already 11°, but also a superb scenery with the Mont Blanc summit in front of us.
Small problem is that the wind was east when the valley is north-east, the brezze was time to time jumping between valleys and was crossed on the slope.

We however managed 3 rounds with lots of interruptions, with 16 pilots. In this particular conditions, the slope didn't keep its words and was evetyhing but consistent with very short cycles, interruption, restart, 25 minutes interruption, then resume, etc ...

At this game some pilots were well served, and Thomas Faure did an hold up on the 3 rounds, winning by a very good margin as the second pilot is at 930 points only. Well done Thomas ! 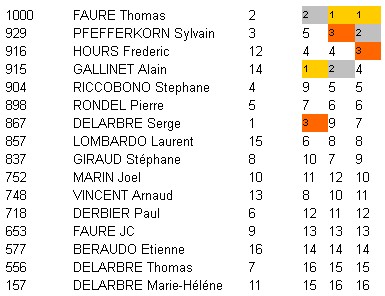 We ended with a drink at the car park before everybody returns home.