An amazing onboard video !!!!

Look at this onboard video from Jean Claude Gonnin (Spain) !!! It is taken using a GOPRO HD from a fully moulded glider. A very very nice video, high quality ... it's just magic !

Looking for the ideal F3F spot !

I almost founded it.

Located in the Vercors mountain chain (Alps), this spot is a cliff ending a deep valley facing noth wind. the edge est 300 m large and the start of a huge flat field, perfect for landing. 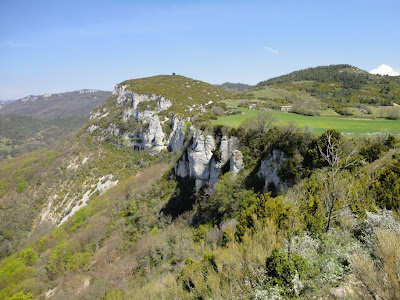 The parking is close to the slope, there is no walk to do.

On the following panoramic picture, you can see the deep valey on the left and the "wall" on the right :

but unfortunately, there is a "hic", in fact a double problem. First of all the owner forbids slope soaring here, and second there is trees and bushes on the edge that prevent to install an F3F course with buzzer men and DC, launch the plane, have a good visibility.

F3F will have its world championship !

After moving from provisional to official in 2009, it has been voted at the CIAM in 2010 that F3F category will have its world champioship. This is a good news for this "sport" that always have lots of flyers. 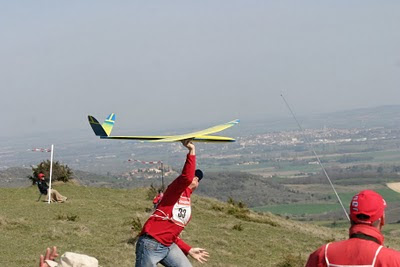 The first world championship could be organized in 2012, and some rumours say that Germany could be a candidate to organize them, probably in Rügen.

Now the question is: what will be the futur of the Viking Race ? Will it be in alternance with the worlds or will it disappeared ?

The real problem is to find organisers and suitable slopes.
- April 21, 2010 1 comment: 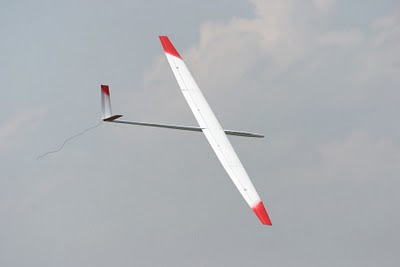 The flying weight is about 3.5 Kg and is designed to go up to the FAI limit of 5Kg. 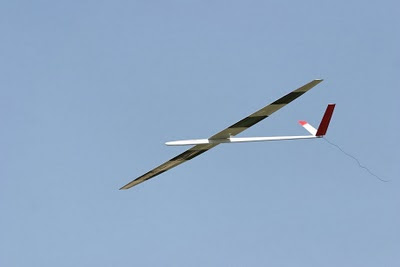 To obtain the rigidity, you can easily imagine that there is lots of carbone inside.
I saw if in flight before the french championship but it's too early to conclude anything. the plane has only very few flights.

Last week-end was the 2010 F3F french championship on the VKR slopes (Laurac, slope A). The weather forecast were very pessimistic with no wind or very little wind. After a Friday on the slope waiting for the wind, we finally got some good wind on Saturday and Sunday to complete 14 rounds with 34 pilots.

Conditions were challenging with, as usual, some nice thermals, allowing to fly some sub 40s.
I started very well the competition, winning round 1, then staying in the top 2 and finish at the 1st position the saturday evening.

On sunday, I was the first pilot to fly the 6 next rounds, and to be honest it was an handicap because each time, with the 5 minutes interruption between each round, it was nearly impossible to read the air before to launch. I did everything I could to keep my title, but Andreas Fricke was very strong and did no mistake.

At the end, I'm Vice-champion with 991 Points over 1000. I'm disappointed to failed so close to the victory, but on another hand, I'm happy for Andreas who really deserved his victory, flying very cleanly, handling the pressure very well. Andreas makes a nice Champion ! 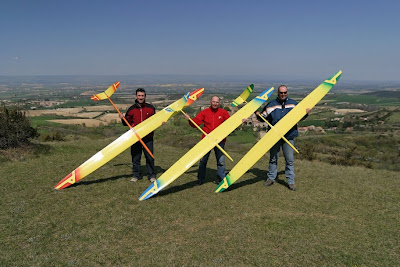 The results are the following (including the evolutive ranking, round by round)

This is not excatly about aeromodelling but I think it is useful. My Sony camera is producing mp4 video file like most of the mobile phone or recent APNs. Unfortunately, as soon as you want to edit the video, Windows Movie Maker is unable to recognize this file format. This is a shame because WMM is a nice software (and freeware) to edit quickly a video, add title, a music, then encode it to the right size and definition.

I found on the net a very useful tool that converts mp4 file into AVI. Its name is mp4cam2avi 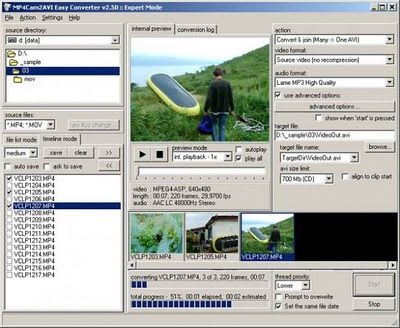 They say: MP4Cam2AVI is a MP4/MOV to AVI repackaging tool for digital photo-video cameras, it makes their clips editable in VirtualDub, MovieMaker and other AVI editors. No video recompression, no quality loss, fast operation (5-20x realtime), no quicktime needed.

I tried this tool and it works great ! 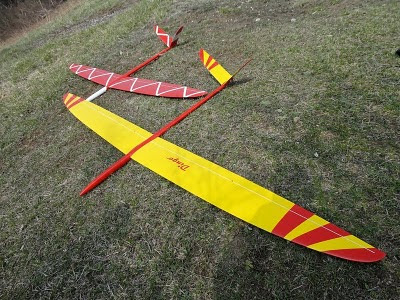 Last week-end at the local slope was a festival of Dingo with 3 of them: 1 for maiden, 2 for practice, including mine. This was a good opportunity to take some shots in flight.

I tried to play with the snapflap ratio using the fine tuning feature of the Futaba T12FG, but finally I returned to the initial settings that make me feel more confortable with the turn.

My Dingo is 2500g heavy, but I really don't feel the weight of the wings and the plane is pretty responsive on the ailerons. 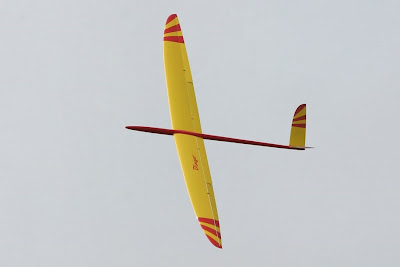 I also tried few DS which is for me a good test for any F3F plane to see how behave the airfoil.

If the plane start very soon to accelerate (to prime ?) despite a light wind, then this is a good indicator about how fast is the section.

This is the case of the Dingo. It gives the feeling to have lots of power, lots of lift, and accelerate pretty quickly, in few circles.

Few days before the French F3F championship, I didn't want to risk the plane stupidely, but sure the Dingo will return on the dark side of the slope !

I ordered some tungsten ballasts for the Dingo. I should have them soon :)

The Dingo is really a beautiful F3F ship and very very efficient ! The only comment I have is on the ballast system which is from my point of view too basic and could be improved a lot.

It has been always painful for me to release a video of my planes in flight because it's difficult to find somebody able filming or shooting while you are piloting, and with good result. I have few of these people but the problem then is when they are not at the slope, no video is possible.

I remember few years ago when I suceeded to pilot my Electro Arcus and at the same time take some shots with my DSLR Canon 10D... not that easy and dangerous for the plane :) !

So only one solution: build an helmet cam ! 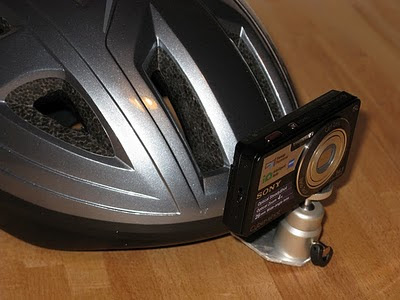 This is what I've done: I bought a helmet from Decathlon at 13 euros only, and reuse the rotating head of a small camera tripod. I just buit a fixation with some aluminium, glued in the front of the helmet with epoxy.

The result is quite nice and should work nicely as soon as the correct aligment of the camera will be found.

More pictures on my Picasa Album 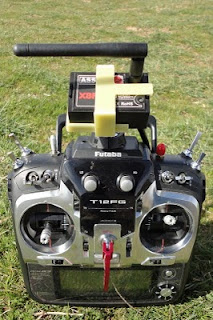 I validated my Assan external module on the T12FG transmitter. when installed it looks like a Star war equipement but it works great. I did again some testing to confirm the difference of behaviour between pin 5 and 6 of the trainer plug. Pin 6 is always ON, which means that as soon as you insert the trainer plug, the Assan Module is switched ON. With pin 5 the module is switched ON at the same time than the radio. I observed the same behaviour on my T12FG or my FF9.
- April 08, 2010 No comments:

I took lots of pictures of Mike Evan's Strega at La Muela that you can find here: 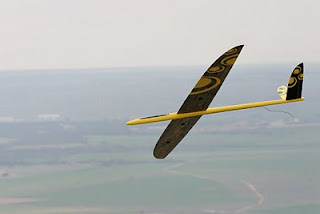 His first name is Hugo and he is 9 years old. Hugo knows most of the plane names used in F3F by heart, pilots like nobody for his age. The flight path is always very accurate, turns are very nice. Only the anticipation is missing. I'm impressed, really impressed !!! 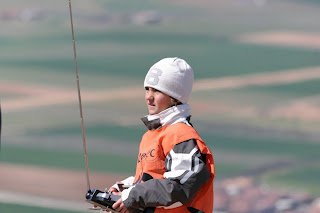 He started to fly with a X-Race 2.5, then continued with an Alliaj (1st generation). 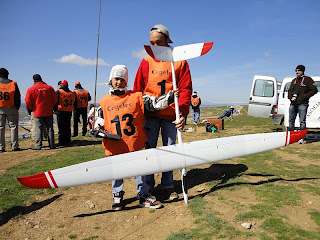 Hugo received warm applauses after each of his flights, was interviewed by the television. I'm convinced he will become a very good and competitive pilot in few years !!! 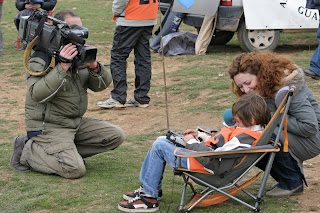 Last week-end was the FAI contest of La Muela. This year, the contest was not part of the Eurotour, however 40 pilots from France/Spain/Portugal/UK came to this mythic slope where all slope directions are available in a single place.

We have been able to complete 5 rounds on Friday, and 1 round in very light conditions on Saturday before the rain. 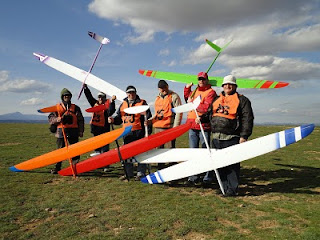 I started with a very good first round where I took all the risks in the turn anticipation to achieve the second time just behind Mike Shellim. This was pretty dangerous, because I noticed that the base judges were unexperimented and easy to distract.

For the second round, I got better air, and thanks to the Alliaj HM I was able to get 1000 points.
I flew the third round in a light air and manage a 53s against a 41s :(

The next round was a new 1000 pts, followed by a good 5th flight. On Saturday, I was flying in the very first pilots so because the wind was suppose to arrive this round was the round of all the danger !!!!

I flew in an extremely light air. Sometime the anemometer was indicating less than 4 m/s when the average during the round was more around 7 m/s. I did everything I could to obtain a 61s. But few minutes later, Thomas flew a blistering 46s in the biggest thermal of the day, making this round my discard.

Overall, despite some comments here and there, I think I got the same air than most of the people. I didn't have the best thermal, but I also didn't get the worse air. The rest is a matter of plane performances and piloting in order to extract the best from the air I got, limit the faildown in light air, only an half cut turn. 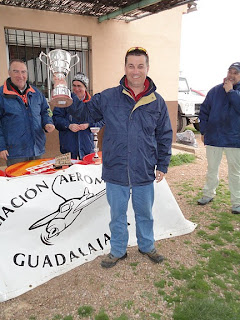 This is my third win at La Muela since I go there: (1995, 2009, 2010). Orgisation was fine this year, no technical problems with the timing system, backup timing system available, 2 slopes equiped in case the wind change of direction. I think we could have gain a round over the 2 days, but the 10 minutes break between each round was probably necessary to let the paragliders and hangliders to take off and fly away of the slope. The only point that could be better is the concentration and accuracy of the judge sometimes. This is not an easy task for them to stay all day long in the wind, so a big thank you to them all !

On the plane side, Alliaj HM appeared to be extremely competitive, able to keep the speed and energy longer that other planes, including the Freestyler. I have also flown the Dingo during the free flight slots was amazed with the speed and turn speed. I need however to modify the settings, because it showed a light tendency to stall when you try to do a sharp turn in light air.

Aside the competition, it was a great week-end with my french team mates: We eated wery well each evening, jumping from Tapas to Chuleton ! We assisted to the Eastern celebration downtown in Guadalajara.

La Muela is definitively like a pilgrimage for me for 15 years now !