I recently received from Samba Mmodel my Pike Precision electro fuselage. Below are some pictures of it. the fuselage arrives with the servos tray ready to mount, servos being upside down in this configuration. elevator snakes are in place. A small pocket with accessories such as the wing connector (green MPX connectors) and wires, ball clevises. the fuselage is shorter thant the glider version, present the same inner section, that is to say it is very tight. The motor must be as inrunner, with gear train. Several combination of motor/propeller/ESC are possible. On my side, I will reused my Kontronik Kira 480-43.

For further information you can contact Samba Model. I will start the assembly soon and will post the progress here.
- March 26, 2013 No comments:

I finally purchased the Solius RR to fly sometimes at lunch break closed to my office, and also do some aerial pictures with the GoPro3. I like the look of the Solius that reminds me the Blanik L-33 Solo.
The review starts very badly with an uncomplete RR kit. the tailplane was missing, and also the user manual and the ESC user manual. This is very unusual for MPX, but shows that nobody is perfect, despite the "made in germany" writen on the box. The missing parts couldn't have been removed after leaving the manufacturer, because the cardbox was perfectly new, untouched, still sealed with the original tape, and because I choosed myself the box among 15 kits at the reseller stock. My reseller, very reactive, fixed the problem quickly by providing me the missing parts.


What do you get: 2 wings, hopefully, 1 fuselage, 1 tailplane, user manuals, and a small pocket with accessories.

Fuselage is beautifully assembled: Elevator and rudder Servos are in place in the fin and hide with some white vinyl. the elevator control command is very simple and without slop. I just needed to adjust the length and lock with some cyano on the metal clevis on servos side. The positionning and lock of the tail on top of the fin is perfect.

In the front of the fuselage, motor and ESC are in place. I found the fuselage compartiment not very convenient but usable. The ESC takes lots of place, in front of the battery compartiment. Another bad surprise what the the motor was cabled inverted, so I had to remove the glue fixing the cables, the swap to wires to get the right rotation direction. I moved the ferrite ring that was too close to the ESC so I could place it more conveniently. As received I used the full range DMSS JR RG631B 6ch Receiver which is tiny and placed on the floor of the compartiment with 2 sides tape. Antennas are located at 90°, one in the direction of the fuselage, and the second one across, using cotton buds that I cut at the needed length to host them. The satellite antenna is across the fuselage. Once the receiver and the antennas installed, I cut a small piece of EPP at the exact shape to cover, protect, immobilize everything, as you can see on the pictures.  As battery, I use an hyperion 1900 mAh G3 EX. the battery compartiment, is very deep. I think that the received could be moved at the rear of the compartiment if you don't need access to it.

Wings are also beautifully made and assembled. No more carbon tube as spar and joiner, each half wing receives a aluminium tube around a fiberglass rod as spar and joiner. The root of the wing is a big plastic part that allow to connect the wing together and provide the integrity and stiffness as the half wing joiner are secured. Stiffness obtained is good.

I found the wing servo connectors very hard to impossible to plug, so impossible to exctract without damaging the wires. So I sanded them a bit to ease installation and extraction. Here again, given MPX reputation, this is a bit disappointing. I removed the servos cover to change the control command position at servo side, in order to get more travel on ailerons. I replaced the servos covers using some blenderm.

On the radio, I set 150% of the travel everywhere to adapt the setting to my piloting. Then if needed, I will reduce.

Last saturday with low wind at the slope was a perfect day for the maiden flight. I installed the battery in oder to get the right CoG, indicated at the intrados of the wing with a very convenient mark you cannot miss. After a quick check of the servos direction and travel, and I throwed the Solius in the air. The climbing rate with the motor is very good with an angle around 45° to 60°. I few seconds you reach a confortable altitude, then you can soar and start thermalling. At full throttle, I noticed a vibration creating an ugly noise. This is a shame because at half throttle, the motor is really silent.
The Solius is agile and light at the sticks. It is rather stable in trajectory. The gliding ratio and the cruise speed are pretty good so you can move quickly from one place to another place, without loosing too much height. This is a very good point for thermalling. This feeling is reinforced by its ability to easily circle, sometimes very hard, without any bad habits. When you push the elevator stick the solius accelerates well, but the top speed remains reasonnable, which is better given the foam structure of the plane. During the diving, the smallest change of angle makes the wing tip to move as thers is no spar until the extremity of the wing. I will probably rigidify the wing tip with some carbon flat rod.

Aerobatics is preasant. Vertical manoeuvers are lacking of amplitude, because of the low inertia of the solius. the looping generally ends as a "comma" if you don't use the motor to help. Rolls are well axed, the 4 steps roll is possible if you do the right corrections during the rool, using the rudder. The inverted flight is very easy with or without motor. I was surprised to find myself to gauge the throttle while pepraring a low inverted flyby.

I flew all the afternoon, mainly without motor, using the lift of the slope. The solius penetrates wind pretty well. However, I regret a lot that, because of it design and architecture, it is impossible to ballast it, as it was on the Easyglider (in the joiner).

In conclusion, I would say that the Solius could have a been perfect considering the following flaws/issues:


Despite all there, I still consider that the Solius is a real step forward in the foamy world. It is a true glider with real capabilities that will allow any pilot (from intermediate to advance) to enjoy, relax, thermal. in the air you really get the feeling that it is not a foamy.

Here are some pictures in flight. Sorry for the light, but the sky was grey with lots of clouds. when coming back from La Muela, I will do other pictures with sun this time, and also some video.

I just received the following picture from my friend Frederic Hours. He flew the F3F spot near Gap again, but the site looks very different after the snow falls of last sunday, with 40 cm of snow !!!
He had 3 to 6 m/s and the slope was very good. 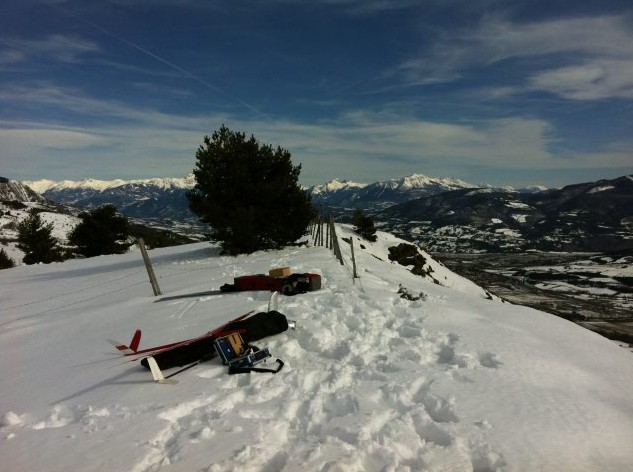 
Before the bad weather and snow come back, Saturday was a good window to drive to Gap (100km south to Grenoble).

Testing a new spot is always a mixing of excitation and stress. Will the slope be good and fast ? Will the landing area not too problematic ?

We (Joel and I) arrived around 1pm at the parking and met Arnaud who found this slope. After a 10 minutes easy walk we arrived on the crest, visited the area, and the landing zone. Then we start to fly on very variable conditions.

But smoothly the wind increased to read around 10m/s in the middle of the afternoon. The lift became consistent with no "holes".

I flew my Needle 100 DSL all the afternoon, and enjoyed it a lot, as it was very fast and was tracking very well. Later in the afternoon, Frederic joined us to  enjoy strong lift, while the sky was becoming darker, announcing rain and snow in the coming hours.

Today, there is 5cm of snow on the slope and it is still snowing :( !

What a cold and snowy winter !

An afternoon at the local slope


Finally snow has gone and last sunday afternoon was a very light breeze and cool temperatures around 16°. I started the afternoon with the Boar.

It was really great, the boar was surfing the sky fastly, circling great in few thermals, doing aerobatics easilly. I was able to do 3 rolls in sequence without problem.

Then the breeze was established, so I flew the Schwing88. I did some DS light, and the plane is very good at it. The Schwing 88 tracks very well . Here is a video I did:

The following article (in French) describes a home made Lifting-canard sailplane for slope soaring. A very original approach but finally an excellent airframe according to Jean-Francois. 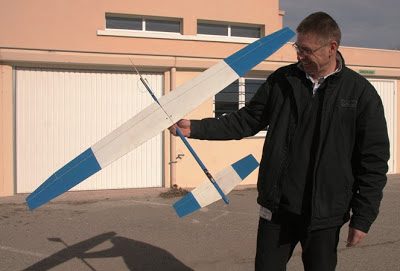 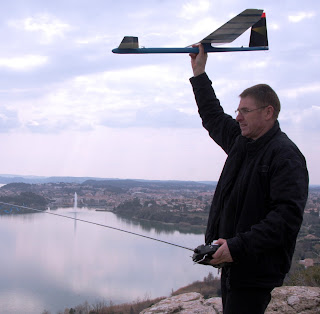 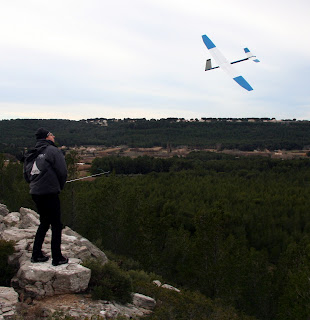 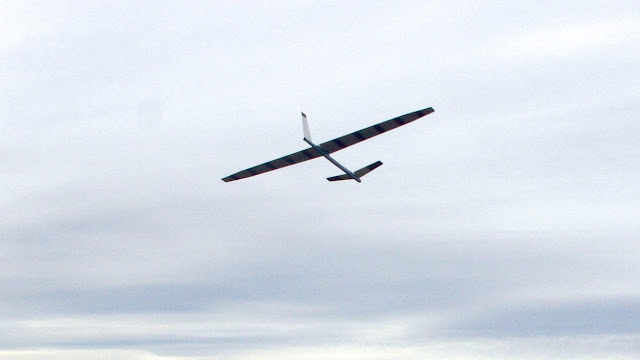 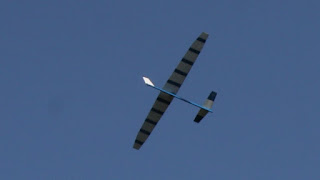 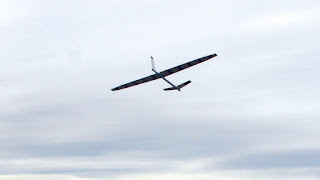 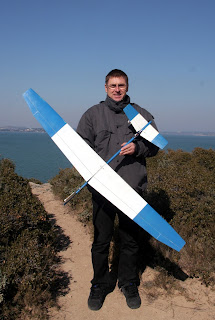 As announced on Planet-soaring few days ago, and despite some contradictory information denying or confirming that Graupner was in Bankruptcy, Graupner offficially becomes from the 1st of March Graupner / SJ Gmbh. In other words, SJ Propo acquired Graupner, keeping the brand name.

You can read the official announcement on Graupner Website.

The press release insists on the following points:

What is not said is that the number of employes goes from 120 to 38 which means lots of people/family impacted, which is sad. 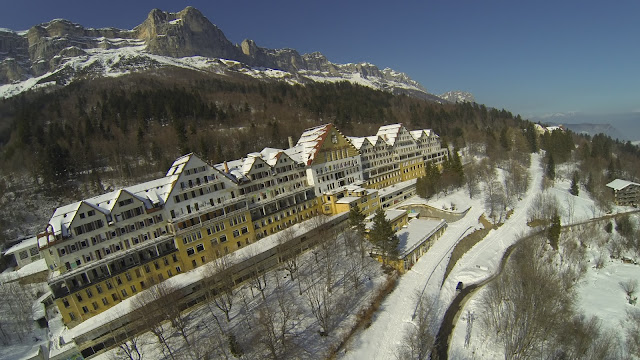 Jack Nicholson just signed for the second part of "The shining" (http://www.imdb.com/title/tt0081505/). The new movie will be filmed near Grenoble, after I found the ideal place for it :) !

More seriously, this is a Sanatorium, built in 1933 and abandoned in 2009 as the sanatorium has been moved into Grenoble suburb. This sanatorium should be destroyed soon.

This is a shame because the building is very nice, and the scenery from this place is just awesome as you can see on the last picture.

For the anecdote, few years ago during april fools day, a rumour was saying that a Qatari prince bought the building to transform it in a luxury hotel. The rumour has been relayed in the newspapers at that time.

For the aerial photography, I used my EasyStar 2 and the GoPro 3BE, with 2s elapsed time pictures.

Some talented photographers did some picture inside of the buildings. I recommend you a visit to the following albums: 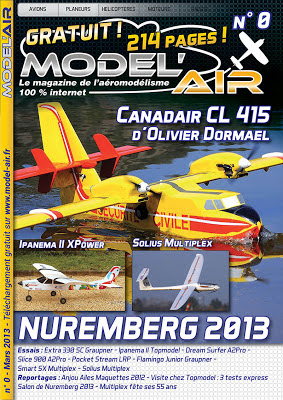 Well, this is the issue number 0, still a project, so not sure the number 1 and next issue will be published one day. The concept is to publish an electronic magazine (3 resolutions available for PCs, tablets and smartphones), free for the readers, and financed by the advertising. A bit like RC Soaring Digest. Model'Air magazine is a generalist magazine about aeromodelling. This number 0 has 214 pages with reviews, reports. Premium quality, superb pictures and editing, plenty of articles like the test of the Solius from Multiplex, of the report about Nuremberg 2013. In addition there are few hyperlinks to videos on youtube. In short a superb magazine to donwload and enjoy ... in french !  (a good opportunity to learn this nice language ;-) ).

You can download this issue at the following URL
- March 01, 2013 No comments: