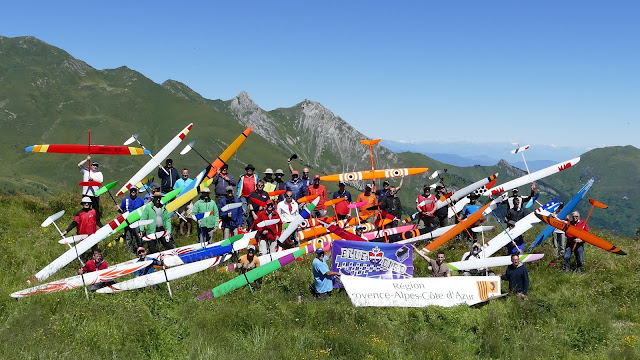 Back from the Col de Tende FAI with 2 new trophies, world cup and eurotour. First of all, a huge thank you to the organisers Allan and Paul Eytan, the CD, the base judges, the helpers. Without all these people the contest would not happen, so again "MERCI" ! Even if the weather was less cooperative this year, it is still a super competition in a atomishing landscape !


On friday, it was cold with the breeze coming from the north. After a quick welcome and registration, we moved to the north slope and, after a breafing, observed a minute of silence for the victims of the horrible terrorist attack in Nice during the bastille day.
Then the contest started in this north slope, close to the fortress and we managed 5 rounds in good but not strong conditions. The slope is particular, not straight, and without real edge, so the flying technic must be adapted, with a difficult anticipation, especially on the left turn. We finished around 6pm so could get some sport flying after.

On Saturday, the wind was supposed to turn to the south, so the organiser prepared the course on the nice south slope, before the north breeze starts to blow again. Instead to return to the fortress, we decided to install the bases on the back of the south slope, and honetly, it was a good surprise, the slope is more convenient and work the same than the other north slope. We did 3 rounds before the wind drops at the end of the afternoon.

It was a black saturday for me as after my run of round 7, while walking to the landing area, I totally lost the radio link on my neon orange Shinto which started to circle, out of control and crashed on a car. Hopefully nobody was injured, this is the essential. The car has light damages, the plane is heavily damaged, but this is secondary. I will post more on this later.


Sunday started badly to, when Tobias Reik, on behalf Thorsten Folkers, put a protest to ask the organiser to count my round 7 flight at 0 because the plane crashed outside the landing zone. Considering that the landing zone was indicative, not marked on the ground by a line and not checked by a dedicated judge, the protest was hard from my point of view, but ultimately was true, so the jury put me a zero score, too bad ! Curiously the same day, Siegfried Schedel didn't get a zero when loosing his plane from sight and crashing it down the valley far from the landing zone indicated. Selective rules you said ...? Anyway, This is really not a great sportmanship from the guys behind this protest as I was already hitted hard by the lost of an expensive model that was in addition my A-model. But ... lesson is learned !

At the end, the protest was ineffective as I had still a little margin, but no more joker, so no more right to make a mistake. Finally, this protest had the opposite effect on me, reinforced my determination and fight spirit and I managed to take more advance in the 2 rounds we have flown on Sunday ... sorry guys !


The conditions on Sunday were extremely variable with variations between 42s and 73s in few minutes, average being above 50s. We were expecting the wind to grow, but it didn't happen before the end of the comp. After 10 rounds, the constest ended and Espen Torp finished Third with consistent flying during all the contest with his Jedi, behind Thorsten Folkers flying a FS5. I ended the contest in first position flying the Jedi the 4 first rounds, then the Shinto the 3 last rounds before the crash it and finally the Stribog the 3 last rounds. The Stribog desmontrated that it was very competitive against the references on the market. Armin Hortzitz finishes 4th. Matthieu Mervelet did a good climb in the ranking to finish 5th. In the team ranking, the french team named "Kousoku Shinkou" (Matthieu Mervelet, Julien Honor, Pierre Rondel) finishes first in front of the German team "Schwaben" (Thorsten Folkers, Siegfried Schedel, Tobias Reik) and another french team "Al Lanes team" (Philippe Lanes, Sébastien Lanes, Allan Cohen). Best speed of the contest goes to Thorsten Folkers with a 37.61s

To put some pictures on this short report, please find my photo album below:


Pictures from Thomas Winkler are here.