As you can see, I'm in my video period ;) !!!
I found this very nice video from Montiel Roberto (Spain). The video has been taken near Madrid. Our spanish friends seem to be very inspired !!!!

Another comment: This GO Pro HD is definitively the best camera on the market. It manages the light as nobody else. You are always sure that the videos recorded will be great.

This evening, Jean-Claude Gonin posted me a new spectacular video about the towing of a 1/4 scale lunak with a real airplane !!!!!

This video posted on Vimeo by Pierre-Arnaud, aka "l1pulsif", is a superb and very dynamic videoclip about Macon 2010, a famous and very popular slope soaring meeting in France.

I just received a mail from Jean-Claude indicating his new great video taken during a slope meeting in Alicante (Spain). Enjoy !

Aside the Viking Race last week, I had the opportunity to see a brand new Vampire, the new F3B ship from Jesina (Czech Republic). 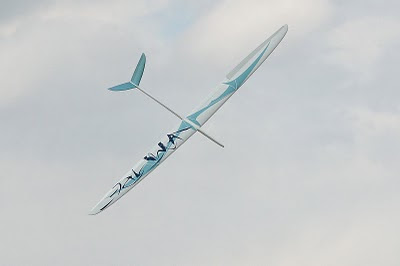 For few years, all new F3B coming on the market look like the famous Freestyler. Shooter, Radical, Proton, Crossfire 2, there are all the same apart the wingspan at the point where it's difficult which one it is when flying.

There is fortunately few exceptions like the Dingo, Alliaj HM, and this new Vampire. The shape of the fuselage is very particular. The color scheme is very nice.

The section is from DP. According to the owner, the plane seems to be fast, turns well.

We will judge about the performances during the coming F3F competitions :)

I took my MPX merlin with me to the Viking Race in case of a calm day. I had the chance to maiden it, then to fly it few times, and I must say that I'm impressed by this little bird.
The sink rate is higher than a "normal" glider which is normal considering the size of the plane, but the handling is great and the combo sold by Natterer Modelbau is perfect, especially when using a 3S Hyperion G3 850 mAh. 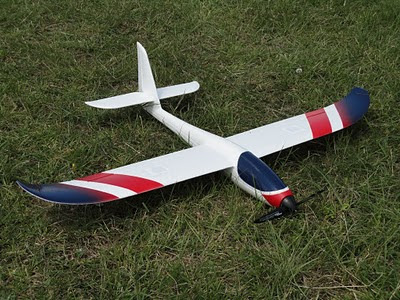 With this battery, the climbing is amazing, almost vertical. The battery also sustain the discharge without collapsing which is good. We organised an informal F3F race (2 rounds) with 6 pilots and thanks to the battery, I won the comp, with a 47s in the second round. Other pilots had less perfomant batteries :) 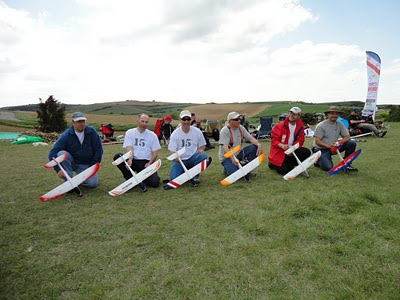 So I definitively recommend this battery:

Hyperion Generation 3 Lithium Polymer Packs are proving truly revolutionary in both performance and value. Compared to an average of the batteries on market last year, they provide up to up to 7x more cycles under the same discharge conditions. And that makes them a bargain price-wise.

But they also deliver the highest voltage and flattest discharge curves under load that we have ever seen, which makes them the best performer you can buy. And tests have shown that at the 70%-discharged point in flight, they are delivering as much as 40% more power than previous generation LiPo.

The fact that they can be safely charged at up to 5C/6C rates - for charge times as low as 10 to 12 minutes - is just icing on a very tasty cake.

You can find the specifications here

To finish here is a video (from Thibaud Ringenbach) of my first run with the Merlin. I did a 52s with a big cut. But you will see how good is this little bird :) ... look at the turns !

Last week during the Viking Race, I received an exemplar of the DVD "Lift Ticket in Norway" from Espen Torp hands. I will watch it soon a do a write up on Planet-Soaring.com. 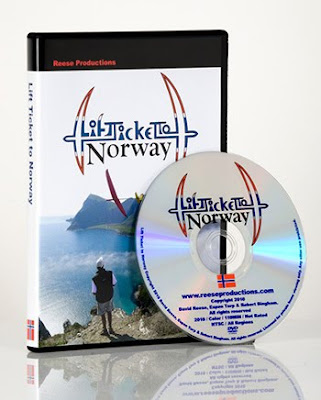 LTNO is the second opus from Dave Reese, who spent 3 weeks around norway, guided by Mr Espen Torp himself, and visiting different places and superb slopes and landscapes.

20 rounds, then 4 additional rounds in a fly off with the 20 best pilots that will stay in my memory forever !

But the result is that I won the Viking Race, I haven't realized yet !!!!
The preparation started 8 months ago when I decided to change all my planes for the season 2010. I kept only my Freestyler (that I didn't use finally), ordered a Dingo and an Alliaj HM, then got a second Alliaj HM after exchanging it with my Martinet F3F.
Then the snowy winter didn't allow me to fly, even a little, F3F. Practice restarted in spring with few contests, VRQ (qualifications), then La Muela FAI open that I won, then the French Championship where I finished second. A had few practice sessions, but I didn't want to over train to not saturate and keep the pleasure to fly.
I knew that the level would be very high, especially from my team mates. From day one, I gave my maximum to realize the best time I could, in each round, whatever the conditions, analyzing the conditions almost real time during the round and ajusting the ballast accordingly, change the turn style depending of the slope, or the wind direction.
The most difficult for me was Laurac Slope B where it is the thermal lottery. I knew that if could affect my score. The objective was to lower the damages on this slope B and try to accumulate good flight on slope A. Then we switch to St Ferriol. Unfortunately the weather was not cooperative and Slope B was not working as usual, with crosswind from the left which give very variable conditions and poor lift. Here too, I had some damages with my second discard round with a 59 against a 45s.
Hopefully, we finished the competition all together on Slope A with very nice rounds. Alexis Marechal was putting lots of pressure on me to bypass me as soon as he could, so I couldn't do any mistake.
I resisted very well to the pressure and even increased my lead over Alexis during the last rounds, then during the Fly off.
Initially, I was not convinced by this fly off, but it was an historical moment when 80% of the times were sub40s, unbelievable. The flying order was the reverse ranking order, so being 1st in the ranking, I was flying at the very end. The stress and pressure was at its maximum. Despite 400 pts above Alexis, I couldn't afford 1 or 2 bad times. Alexis exploded his Alliaj HM in the second fly off round, which destabilized me a little, but I suceeded to reconcentrate very quickly and fly a 37s ... but against a blistering 30.79s ... outchhhhh ... small score :(
I did the last flight of the Viking Race and obtained a good 36s. Now I can destress and release pressure :) ....

It was a difficult week because of the weather sometimes cold and wet, the planning (wake up at 6:30 am and go to bed at 11pm after updating the web site), the stress, etc ... but I'm proud of my result (1st individual and 1st team) but also the result of my team mates.

You can find the picture of the competition day by day here: http://picasaweb.google.fr/vkr2010

All the results are here http://vkr2010.free.fr 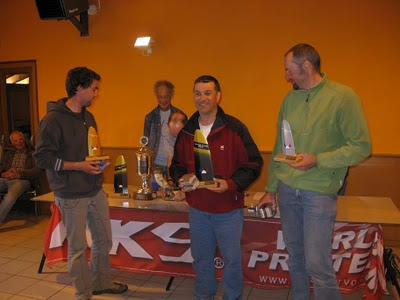 Here is a Video Jean-Luc foucher found on youtube. This video has been taken During the Fly off:

I uploaded on vimeo a video of the Multifun Electro 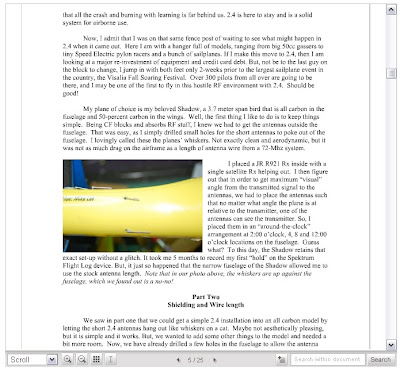 Andy shared an interesting article he found on the net about 2.4. You can donwload this article here:

I uploaded the complete review of the Typhoon on planet-soaring.com 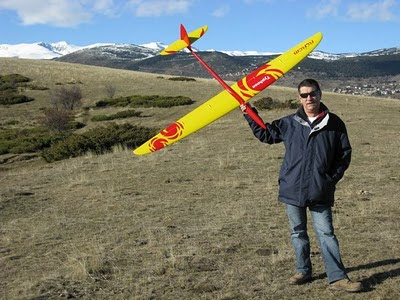