Video: An afternoon in Corps

Here is the video I did last saturday in Corps. The news is that I tried to film with my EOS 650D in addition of the onboard Keycam 808#16 V2 Lens D. I'm satisfied with the result. Therefore in order to ease the video shooting, I invested in a LCD viewfinder to allow better viewing while filming. I also need to work on the settings in video more to obtain a more consistent result.

An afternoon in Corps from Pierre Rondel on Vimeo.

The following video from Franz Dschulnigg shows a terrifying launch of a 7m Arcus from the top of a cliff in Switzerland. This is just scaring, even if everything goes well. Unfortunaltely the video doesn't include the landing that must be also challenging considering the topography of the place. The July issue of RC Soaring Digest has been released. It includes an interesting study about dimpled wing aerodynamics and some reports about thermal duration event and also semi scale towing meeting in UK. You can download the issue using this direct link: HERE
- June 24, 2013 No comments:

An afternoon in Corps

Saturday was a slope club meeting in corps. Not really a sucess in term of participation as we were only 5 pilots of the club over around 60 members ! but a very friendly and successful flying afternoon and a superb slope despite the light conditions. The sky cleared progressively at the beginning of the afternoon so we could declare the thermal hunting open ! Arnaud from Gap and Sylvain from Lorraine as a special guess joined the group. Lots of F3x planes, which was the good choice for this type of condition, but also the ASW15 of Joel. We finsihed late, once the wind died with the sunset.

On my side, I flew my Schwing 88 and my Pike precision, both without any ballast. I damaged my Swching after going very very low and trying to do an emergency landing 3 or 400m below. I stalled at 5 meters of the ground and broke the fuselage in front of the wings. I'm nicely surprised to see how the Schwing resisted to the crash given the heavy impact. The thick servo tray, solidly fixed with fiberglass, protected the front of the fuselage. The wings and the rest of the fuselage is intact which is great ! I already started to repair, and will reinforce the area located at the rear end of the canopy opening the the leading edge of the wings.

You have probably noticed that since I presented some pictures of the Pike electro fuselage, I didn't show more, and post a build log. The reason is that I spent lot of time to arrange the different element in order to place everything to keep the CG fine, make the installation possible, and especially the maintenance.  The conclusion has been that the fuselage is so thin, that this is nearly impossible. For example, on the elevator servos installed with the servo tray provided, it is then impossible to remove them. This is at the point that some owners decided to not glue the front part of the fuselage in case they need to access the servos.

So I continued to think about a possible layout and concluded that I needed to save more space in the middle of the fuselage, so remove the servos tray, and locate the elevator servos somewhere else. I finally ordered a new set of tails that I should receive in the coming days. The idea is to install the servos in the tails (MKS DS 6100). This save lots of space in the middle of the fuselage, and it participates greatly to keep the CoG right. I change the connectors of the servos to solder grey MPX connectors instead. The femelle connectors are installed and glued with rapid epoxy on the karman.
Now that I have removed the original servo tray, I built a thin plate using some 2mm plywood on which I have installed (from rear to front) the 1.6 A receiver battery, the 8 channel receiver, the magnetic switch with charger connector (from T9 hobbysport).  This plate can be inserted and removed from the canopy and is secured using the 4mm screw normally used with the original tray.

In the front part of the fuselage, I have the motor, then the battery (3S 1.9A) and behind the battery, is the ESC. This layout is because I wanted the 3S battery to be exactly under the canopy and be easily removable. I had the remove the piano wire lock system of the canopy that was taking some space in addition to be too close to the power connector with a risk of short cut.

Below are some pictures of the assembling. I will complete it as soon I receive the tails. Stay tuned !

Results of each contest are ponderated by the number of rounds flown. This make the calculation much more tricky because we need to calculate for each pilot all the possible combination to identify the worse result contribution to exclude from the final ranking. Selection contest cannot go above 15 rounds in order to limit their weight against other normal contest with more pilots so less rounds. I know this is a bit complex, but the idea is to be fair.

Anyway, last week end was the first selection contest following the team 2013 training. For weather and autorization reasons, this constest took place in the south alps near Aspres sur Buech. 8 pilots took part to this contest.  We have been able to fly 12 rounds the first day. We got lots of crossed wind, but within the FAI limits so we had to do with. The second day unfortunately it rained the whole day so we couldn't complete the 3 extra rounds to reach the 15 rounds. Fast time of the day was 34s. Frederic Hours won the competition followed by Sebastien Lanes (both are in the 2013 team) and myself.

Next selection contest will be mid-July at the col de tende at the border between Italy and France. The following photo Album is from Joël Marin as I was too busy with the competition to take pictures in addition. Thanks Joël

Last thursday and friday, I met with the french national F3F team 2013 for a practice and team building session as it was close to my home place. On Thursday, we went to the north slope of Corps but unfortenately were unable to fly as the wind was absent. For friday, we decided to go to Aspres sur Buech in the south alps, with the hope to get more wind and less thurnderstorms which was almost the case. We got some wind, a bit crossed but still OK, and later in the afternoon we could see some showers here and there around our mountain. The 3 pilots have been able to practice, with the course setted up despite the flying condition were not great... The next session will be end of July near Briançon for a day, preceding the league contest at the same place. Here are some pictures taken these 2 days:

Weather continues to disturb the beginning of the F3F season in France. After the snow the previous week, this time was the strong wind. Ardéche is like the south Alps, plenty of nice F3F spot and windy place. Up to now, this competition was missing a good spot for north wind. Yves and I combined our effort to identify a new spot. I worked on google earth and geoportail (detailed maps) to identify a new slope. Yves visited them to validate the spot the week before the contest. Like this, we found a new promising slope, with very little walk. This where all the competitors went on Saturday 1st of June. Problem was the wind reaching 25m/s during gusts, even is the average was within the FAI limits. But this strong wind was creating huge rotors above the landing field. After a long wait, we decided to start the competition, doing 2 rounds in the same flight with a crow start in order to save one landing. We managed like this 2 rounds with very fast time, fatest time around 31s, and almost everybody under 40s. But we also had lot of damages during landing. The landing was totally unpredictable. Hopfully the grass was very high so could smooth the final impact !!!

On Sunday, forecast was saying less wind, bu this is the opposite that happened. this time gusts were reaching 31m/s with an average around 22m/s We waited again, then decided to give a try, at least to validate the contest (48 flights, 12 pilots minimum, this is the rule). But after 2 pilots, the organiser decided to stop the contest because it was obvious that is was too dangerous for the planes during the landing, but even in flight.

In these conditions, I flew my Needle 100 DSL almost full ballast, considering that its empty weight was 2.6kg. It flew great, very fast and stable.

Overall the area seems very promising and we have already found another North slope, even better with a cliff that we need to validate for next year. But definitvely, this region can become the best place to fly F3F in france. A big thanks to Yves Tirand for organising this event and working hard to find the best spot for us to enjoy ! 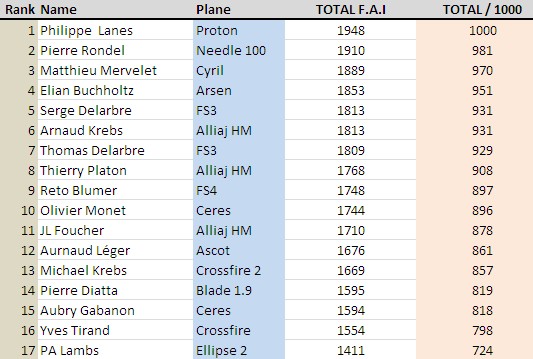 Below is a video I did in order to give you an idea about how fast is this slope:

TOA 2013 from Pierre Rondel on Vimeo.