I'm working currently on the modification of my T12FG in order to use an Assan 2.4 HF module plugged to the trainer connector. The reason behind is that I'm equiped with Assan on all my foamies and small glider, because of the cheap price of the receivers while I'm using Jeti for my mouldies. The Jeti TU module is inside the radio, so no remaining place for another internal module. In addition, I still want to be able to use the Assan Module on my FF9 transmitter. But, when I'm traveling, I don't want to carry 2 transmitters. 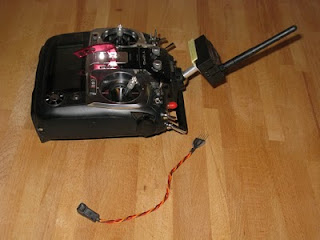 The first step was to build a mount: The first part is a short piece of aluminium tube with a long bolt inside, the bolt is exiting on both side of the tube. Then I built a plate with some 2mm epoxy board. The cable is using a Futaba square connector.
The remaining work consist in finding a elegant way to secure the module on the mount.

My friend Zhen released a video taken from his MK Lego and a GOPRO HD featuring me and my Multifun (Telink) while I was doing the test flights.

Petite Pause from momozzzz on Vimeo.

Merlin, what a good small glider !

Last week-end, while waiting for the wind, Andreas Fricke showed us the flying performances of the Merlin from MPX. His Merlin is coming from Naterrer nad is a combo with servos and motor, but not the combo from MPX.

This small glider seems to give lots of fun, and especially is pretty fast with this motor ! We saw a small race between the Merlin and a sort of Twinjet and guess what ? The Merlin was much faster !!!

In addition, this little glider is able to do aerobatics, or simply to thermal. 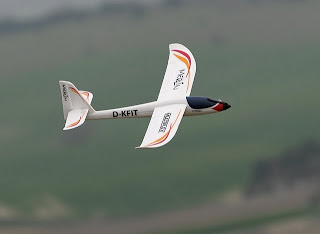 Cherry on the cake, a 650 mAh, 3S lipo battery give a long flying time !
In conclusion, the Merlin a the perfect companion to fly during the lunch break and to be always in the car, just in case !

This first contest was for me the opportunity to maiden my second Alliaj HM, equiped with Jeti 2.4. I have flown this brand new Alliaj HM only 2 minutes before the beginning of the contest :) !

In the first round, I flew the fastest time of the contest with 35.46s !

We managed only 2.5 rounds on the saturday and an half round on sunday, which means groups scoring. I was in the first group and got very bad conditions (52s) while Alexis was doing a 35.75s... Too bad for me, I moved from the first place of the ranking after 2 rounds to end at the 10th place with only 923 pts ....

Anyway, it was a good preparation for the coming season. 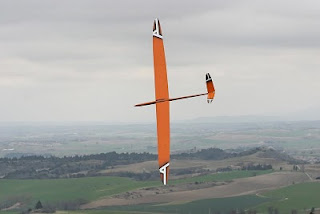 During yesterday lunch break I tried again the multifun after having replaced the broken propeller with, this time, a folding propeller (a 9x5 from aeronaut). I also activated the break on the motor. 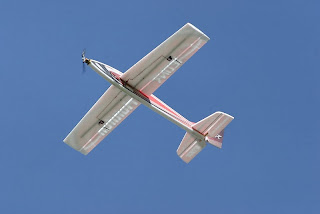 I flew 15 to 20 minutes in calm air. The Multifun is half way between a glider and an airplane which is interresting. It is very relaxing to fly, can do smooth aerobatics easily like the glider version, can fly very slowly.
More pictures here
I will continue the testing before to do a write up on it.
Stay tuned !
- March 18, 2010 No comments:

Last week, I spent 3 days in Torino (Italy) and during a walk in the city and its gardens, falled on this small exhibition from the Italian Air Force and some italian manufacturers.
I approached a Tornado, a Fiat G91, a Bleriot (French), and ASK21 ... 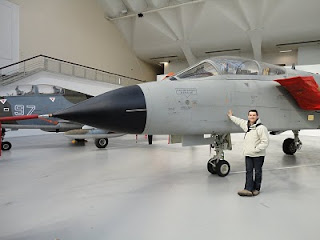 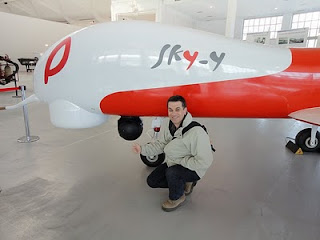 The perfect plane to do aerial pictures ;) !!! I don't know about the price, but probably a little bit more expensive than a EasyGlider from MPX !
More pictures here
- March 18, 2010 No comments:

Here is a short videoclip about the Typhoon RCRCM I'm testing/reviewing at the moment:

I fly a Freestyler since 2007, and it has a carbon fuselage. Therefore my last step to complete my migration to 2.4 was to install a R8 Jeti Receiver in it. Not that easy since the fuselage is full carbon, hopefully except the nose cone.
I created a window using fiberglass. This is done is few steps: 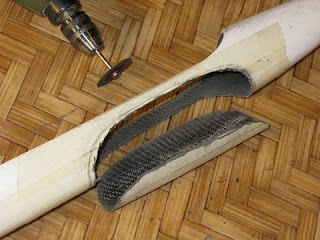 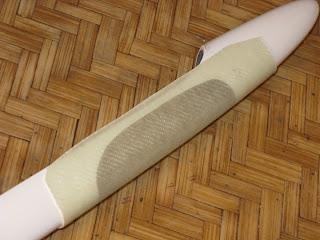 The 2 antennas are installed at 90°: the first one is fix on the window, longitudinally. the second one is for the moment vertical, along the receiver.
I flew with the Freestyler yesterday and it worked OK, except too "beep" indicating a signal lost when I was flying very very far away of the slope, and under a certain incidence, so nothing alarming :)
Conclusion, my Freestyler is ready for the season 2010 and will be 2.4 like the rest of my F3F sailplanes.
More pictures on my Picasa Album
- March 15, 2010 1 comment:

I have this radio mitt from (M&M development) for 10 years. I always managed to launch my plane myself, but yesterday, after launching my Freestyler, I didn't find the right hand entry of the radio mitt quickly and was very close to crash the plane in the trees :( !
Few weeks ago, an F3F mate completetly destroy his brand new Cyril F3F in the same condition ... 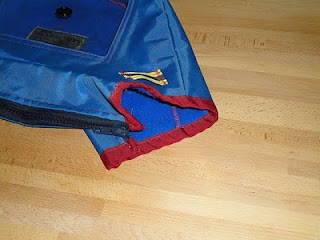 So yesterday evening, I decided to fix the issue and found a easy way to do it. It consists in introducing a soft plastic tube in the hem, like on the picture below: 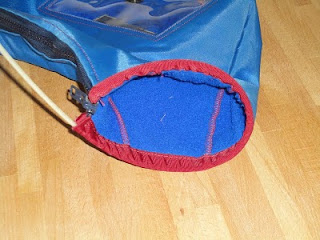 I uploaded more pictures on my Picasa Album
The mod works great (at least at home :) !!!)
I recommend it to everyone using this radio mitt and using it when being alone on the slope.
- March 15, 2010 No comments:

After a long winter, I've finally been able to maiden my Typhoon from RCRCM. The Typhoon was a very nice surprise :) , Easy to fly, good grip and energy retention in turn, good aerobatics. 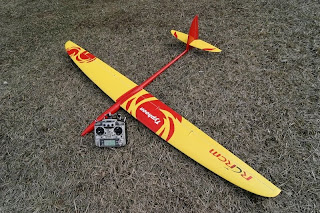 The Typhoon seems to be a very good alrounder and in addition it has nice shapes. I like ! 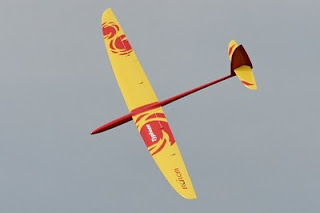 I uploaded all the pictures on my Picasa album
The weather window was pretty small since today, it's snowing again !!!!
Manufacturer website: RCRCM
French distributor: http://www.wittnaircomposite.com/
- March 07, 2010 No comments:

Today, during the lunch break, I maiden my Multifun, electric version. It was too windy so impossible to see anything. After the second flight, I broke the spin :(
The good news is that the motor I choose seems good for the job. So, following at the next episode. 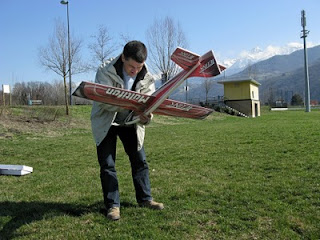 Then I did some picture for my friend Zhen, exprimenting a Mikrokopter made with "Legos", yes you read correct, "LEGOS" !!! 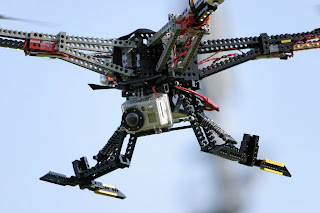 The Mikrocopter is a great machine for aerial work like video or photography. I will probably buy one end of the year. I need to save some money because it's a kind of investment.
You will find plenty of pictures on my picasa album
- March 05, 2010 No comments:

This week end, 14 pilots "fighted" during 2 days to enter in one of the 3 french teams for the viking race. This qualification was on the VKR slopes. Saturday we has very strong wing in Laurac (slope A) with an average around 22 to 23 m/s and some dust to 30m/s! Best time of the day is Philippe Lanes with a 32s, flying a Freestyler. We completed 8 rounds. 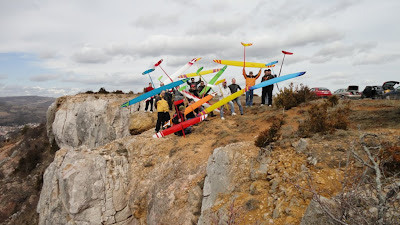 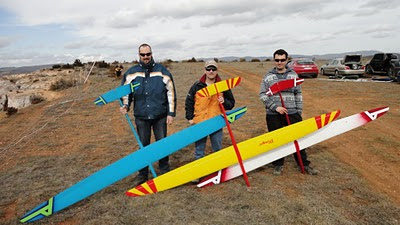 A Dingo in the battle !

I flew my Dingo this week-end. I had only 15 minutes of flying time, but flew it during 10 rounds (over 16) at the last french F3F team selection and finished 4th. Personnaly, I didn't have any pressure because I was already qualified in 1st position, therefore it was a great opportunity to try a new plane and see its potential in the battle.
This plane is just great in flight: very precise and agile, fast and plenty of lift in the turns. 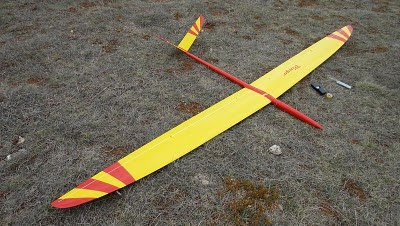 The only negative point that cost me probably one or 2 positions in the ranking is the ballast. It is located in the joiner, but is not convenient and modify the CG (forward). Some slots in the joiner are not free enough (some carbon remains) and the ballast cannot enter completely. This is really a shame because the plane is so nicely made that I cannot understand this.

When ballasting, first you need to use the rear slots, then mix the center slots and the wing slots. I don't know about the front slots. I'm afraid it moves the CG forward to much
The other big news with last week-end is that I finished my migration to 2.4 Ghz by flying my Alliaj HM and the Dingo with the Jeti 2.4 system. Everything ran smooth and perfect, no glitch at all. what a comfort !!!! 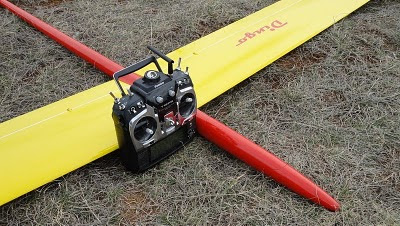 I need to fly my Dingo more, practice, refine the settings, but I can tell you already that it will stay for sure in my F3F ship fleet for the season 2010
- March 01, 2010 No comments: