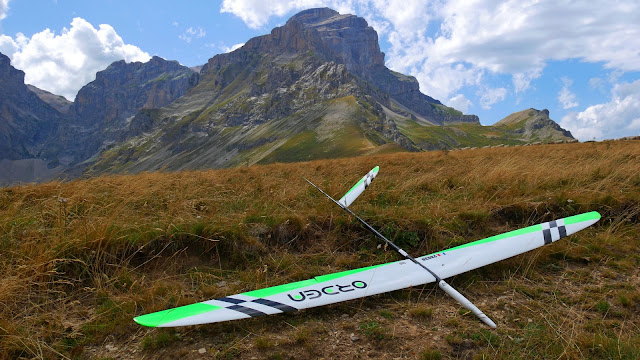 RTGModel is a Slovak-based manufacturer that has been producing F3F gliders for many years now, and is synonymous with top notch molding quality and attention to details. Long based on HN profiles, this new glider, the Orden, marks a breakthrough in aerodynamic design to bring it into line with current standards (new dedicated wing profile, thin fuselage, rounded tip, ailerons running all the way out to the wingtip), while marking its difference by making some original choices. I propose with this review to see if the Orden achieves its objective of competing with the best sellers of the moment. 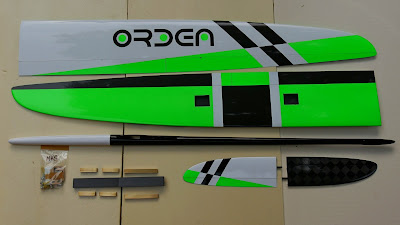 With a wingspan of 2.88m, the Orden is rather small compared to the current trend of 2.95 to 3 meters. The choice of a small 230 mm root wing cord and tail cord is giving it a visual aspect ratio so that the glider looks bigger. The first wing panel is almost rectangular so that the wing area is comparable with other gliders on the market. The tips are rounded without being elliptical, and the ailerons run all the way out to the wingtip to maximize roll rate. The wing has a ballast compartment that can accommodate 1.6kg of brass ballast. The wing joiner can host 600 gr of additional ballast for a total of 2.2kg. As with the previous RTGModel gliders, the Orden has its proprietary LDS system, which has the particularity of having the removable control surface axis using a tool supplied with the kit. It is a brass rod with the inside of the threaded tube at one of its ends. Axes also have a thread. The tool is screwed onto the axis and simply pulled. On the servo side, a wooden servo frame receives an epoxy cage for a ball bearing that takes up the forces of the servo output gear. Do not forget to indicate the servos brand you want to use when ordering.

Let's move on to the fuselage: the diameter is reduced to a minimum on the front part to reduce drag, like the Stribog+. On the other hand, there is no more wing root and the nose is slightly more plunging. As in all RTGModel productions, the servo tray is molded and drilled, with Kevlar reinforcements: Thus, 2 large Kevlar strips run far enough towards the nose for more strength. This fuselage is closed by a small canopy that offers sufficient opening to access and extract all the radio elements without any problems. 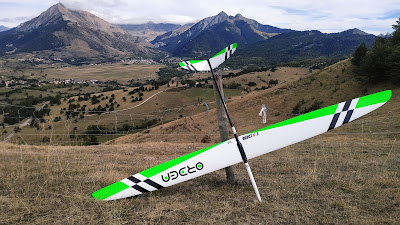 Tails are a strong innovation of the Orden: Rather small in size, they are made full with a core in Rohacell and "spreadtow” carbon fabric, but above all, they are articulated by the middle, i. e. the hinge is inserted between the 2 half cores, which avoids this hinge to work with time. It is no longer necessary to make sealing wipers, as the gap is reduced to a minimum.  Another positive point of these tail planes, they are very light at only 30/31 grams including the carbon rod joiner, but still robust. On these tail planes are the usual aluminum horns facing upwards, which receive the 2mm metal clevises (no ball joint clevis). In use, it is very practical to mount / remove tails when travelling.

RTGModel’ s trademark remains the quality of molding and finishing down to the last detail, and the Orden is no exception to the rule, all adjustments are perfect, the surfaces and paint offer a superb shine, deep colors, in short, a very beautiful work. Finally, here are the weights of the various components: 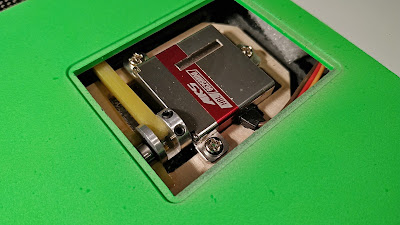 In the more than 25 years I have been doing F3F in competition, I have had the opportunity to ride a large number of gliders. Some require a little more work and attention. This is not the case with the Orden, which has no surprises or particular difficulties.  At first glance, I thought that the radio installation in the fuselage would be complicated because of its narrowness, but this is not the case. I even found the assembly more "spacy" than on the Stribog+. The molded servo plate is perfectly positioned in height and the slight offset in opposition of each servo makes them ideally positioned and the control rods perfectly aligned. The servos are inserted without forcing on the plate, without risk of damaging the output of the servo wire. A little trick on the way to screw the servos in place: I place the servos at the stop of their housing and insert a small custom-made part between the 2 servos, with two screws. This assembly ensures that the servos are perfectly held without any lack of material for the screws.

Personally I mount the female green plugs on the fuselage and the male plugs in the wings. Plug recesses on the fuselage root are perfectly adjusted. Once the wiring is done, I make 2 small parts in 1mm plywood to serve as a stop to the green plug (with a 2mm shrinkage on the edges), and improve the bonding. First of all, I glue these 2 pieces with fast epoxy, then I install and glue the green plugs, always with fast epoxy. To ensure that the grips are positioned perpendicular to the root, I have made 3D printing templates in which I block the green grips during gluing, which also allows me to use clamps during drying.

For the wings, the work consists in gluing the wooden servo frames in place, wiring and then assembling the servos. However, I always add a step which is to put an additional piece of carbon fabric to stiffen the skin even more so that the glued frame and its servos do not deform the top surface. A small sanding before gluing the frames allows a better grip. 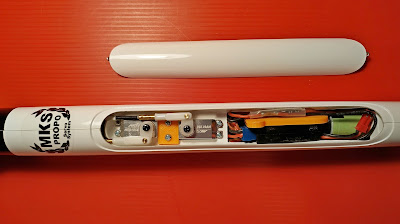 The LDS system is unique to RTGModel and includes a wooden frame, an epoxy cage receiving the external bearing, an epoxy arm, and an aluminum servo head with its axis and clamping screws. The arms for the flaps are a few millimeters longer, so I advise you to identify them first...

Start by gluing the bearing cage to its wooden frame, and then insert the ball bearing into it. The frame must be glued in the correct position, so it is necessary to start by installing the epoxy arm on the steering side and then connect the roll drive to the arm. This then makes it possible to glue the frames, perfectly positioned, with the roll drive in its housing, and optionally the servos, protected from the glue by a plastic film or thin tape. Do not forget when gluing to put a small piece of 3mm by 3mm paper tape on each frame screw hole so that the glue does not get in.

The green plug is glued to the root rib with the wing in place on the fuselage, all surfaces being protected with fine tape and release agent (polyvinyl alcohol solution).

A picture is often better than a long speech, so you can find all the pictures of the glider assembly here:

Small check on the scale, 2175gr empty in flying order, it's very good and let oversee a versatile glider!

Let's go to the slope!

I finished assembling the Orden just before leaving for the FAI competition at Col de Tende mid-July 2019. So I stopped on my way, near Gap, to make the maiden flight. Lift conditions were rather light that day, but the Orden perfectly performed its flight, I just moved back the CG a little to help retain energy in turns. 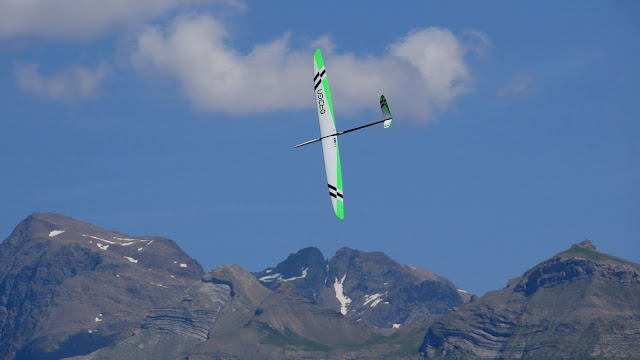 48 hours later, following a crash where I damaged my primary glider, I switched to the Orden and finished the competition with it, winning 3 out of 7 rounds with the Orden, and winning the competition, so very satisfied with such introduction!

What about the glider: in F3F, we don't only look for straight line speed, but a clever mix between speed and energy retention in turns. The Orden has precisely these two qualities. Able to accelerate and fly fast in a straight line, its turning behavior is excellent, combining stability and acceleration when exiting the turn, provided that the snap-flaps are well adjusted. Under certain conditions you can even feel a kind of "kick in the ass" acceleration of the glider. According to the manufacturer, the CG range is between 90 and 100mm. I'm personally started at 95mm and finished at 98.5mm.

In light conditions, the low weight of the glider at 2175grs is an advantage. You can then stick to the slope and tighten the turn without any problems. As soon as the lift is becoming stronger, the turn is widened to an "Energy Management" style turn, i.e. the glider describes a turn away from the ridge with a 45° slope to get grip while on the edge, then return to the ridge and "screw" in front of the pilot to start preparing for the second turn. This turning technique requires heavier flying. 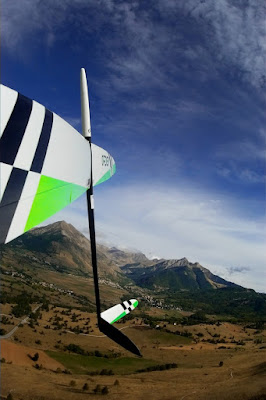 Since then, I have also tested this strong layup wings and could check the excellent stiffness for an empty flying weight around 2350gr only which remains an excellent compromise to cover most of the conditions.

The Orden accommodates many different flying and turning styles. It is just the amount of elevator that allows you to switch from one style of turn to another; there is no need to change the snap-flaps ratio.

In typical sport flying, the qualities mentioned above make the Orden an excellent companion that adapts to all conditions: Light weather and thermal “hunting”, more dynamic wind or aerobatics, very strong wind and ballistic flight. Circling holds perfectly, helped by the small dihedral of the wing. Transitions to travel from thermal to thermal are a simple excercice and allow you to explore the airspace quickly without losing altitude, and the flaps in the thermal position are effective.

All the basic aerobatics goes smoothly even if it is not the glider's vocation. Quadroflaps bring vivacity and precision. On landing, the "butterfly" mix works perfectly and allows you to land short.

In short, the versatility is there and the Orden will give a lot of satisfaction to its pilot whatever the flying conditions or the flying style!

To close the chapter, here are 2 videos about the Orden

RTGModel has succeeded in his bet because the Orden offers much more than just an evolution of the Stribog and Stribog+ but is now able to compete with the market best-sellers. It therefore offers a beautiful alternative for those who want to fly different, with an extremely well built glider, and dreadfully effective in all circumstances. To be consumed without moderation, whether for sport flying or F3F competition. Have a good flight, everyone! 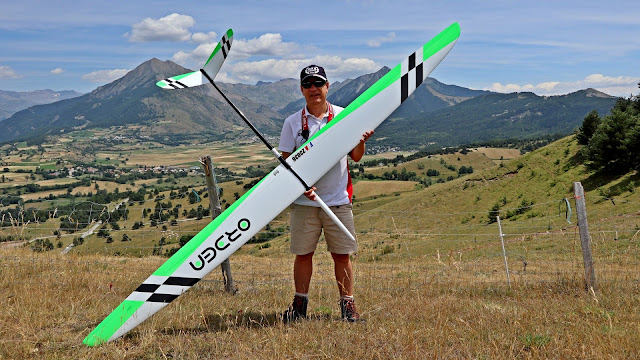 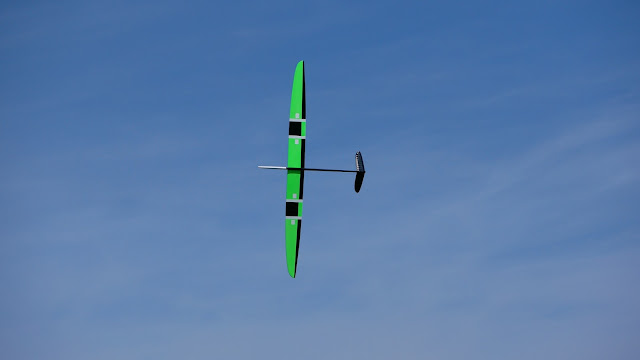 Another flying session with the MicroMax

Good session today with the MicroMax. The slope is not the most efficient one, and the wind was a bit crossed from the left, but the lift wa... 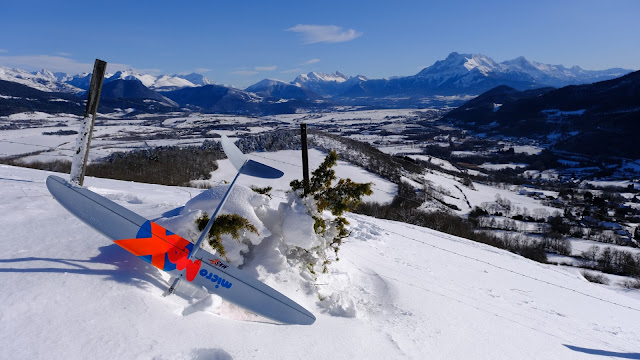