Samba Model is releasing a new slim fuselage for the Pike Precision. Philip Kolb, one of the designer says about this new fuselage:

"As we are always interested in areas of improvement on our planes we are especially intriegued to save drag - especially on fast flying aircraft like the Pike Precision.
Honestly it is very difficult to reduce drag on the wings' sections as the wing needs to operate within a wide variety of lift coefficients. Reducing airfoildrag at low lift coefficients and high Reynolds numbers - so to say at high speed - will almost certainly result in worse performance in other flight phases than speed.
One easy area of improvement though is to reduce the surface of the fuselage. The latest state of the art equipment (batteries, recievers and servos even became smaller than before and thereby allow to reduce the length and diameter of the fuselage nose. This reduction will mainly result in a reduction of inertia, as the nose can be shortened to some extend.
Higher modulus carbonfibre and spreadtow technology allow for a reduction in diameter, especially on the tailboom, where the airflow is fully turbulent and thereby very draggy compared to all the other parts of the glider.
We tried to implement this considerations in the new fuselage design making it even more slim and sleek than its predecessor. The structural buildup is certainly a challenge, but managable with modern fibre technology. The aerodynamic gains will be noticeable and result in better highspeed - and turning-performance."

The new fuselage is 38mm shorter on the front, slimmer everywhere, nose, boom, root, needs obviously a new joiner, and can receive previous tailplanes with light adaptation of the elevator arms. Jane sent me the following pictures to give you a better idea. 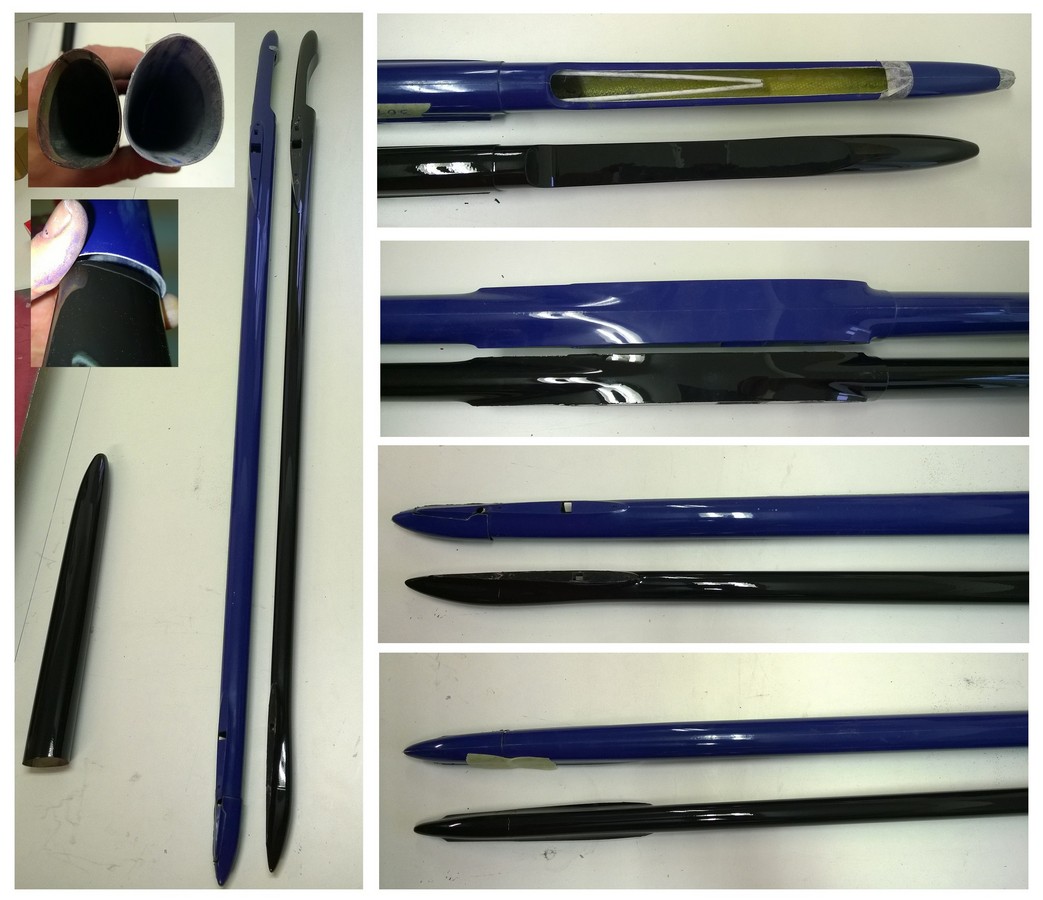 The Vagabond is ready ! It weights 620g. Overall, the assembly went well, the design for an EPP glider is pretty good. I started by the fuselage and carbon rods to stiffen the boom. Then I also installed the elevator and rudder control rod sleeves. Be careful to not bend them while installing them into the foam because when bent they can make the mouvement of the rod less smooth and bad neutral position return. The servo tray is glued on the EPP using fluid cyano. Once done, I focused of the tailplane, that I wanted absolutely to make removable. My first idea, what to modify the joiner extremity (4mm carbon rod) to lock it in rotation with a corresponding print. Problem was that I still could twist the tail because of the rod torsion. My clubmate Joel Marin, who build a Vagabond too, found a clever and simple solution for the tail: use a small aluminium tube at the root, and drill a small hole in the tube and the carbon rod to install a stop pin. The pin have a L shape to secure it with some tape. As final solution, in addition to the aluminium tube, I added on both side of the tail a small epoxy plate to improve guidance. Now, it is fine, the tail is perfectly secured in rotation and translation.

Remaining task mainily consists in the radio installation. I used 9gr, metal gears in the wings, a 13mm old analog but strong servo for elevator, and a tiny plastic gears 9g servo for the rudder, which is a bad idea as I quickly broke the gear. To metal gear everywhere is my recommendation.
Initially I wanted to use a 4cells 2 A eneloop battery, but it is clearly too heavy, even if there is plenty of space in the nose front. I finally installed a 4cells 800mA eneloop battery. I didn't need any lead to achive the 100mm CoG. Flying weight is 620g. For comparison, the uncovered version of the Vagabond is 500g, so 120g less.

Please find below the assembly log photo album that tells more that hundreds of words !

A superb video from Thibaud, using his TBS Discovery Pro.

I use a cotton bud (Q-tip) that I cut to keep the center part. Diameter is perfect for 2.4 Ghz antenna, even with shrink tube around. Then I put some hot glue on one side to block the antenna. In the fuselage I glue one guide with cyano. For the second antenna, I let it free but use a piece of coroplast to position it correctly (vetically), along the receiver. The cost ? 500 cotton bud cost 30 cents so cost is 0.12 cents for 2  !!!!

PS: of course, you can use the cotton bud in your ear before to cut it, so it is even cheaper !!!!!

On sunday, I went to the col des Faisses, near corps. I met there Pierre Emery with his very nice Fox, 3.5m wingspan, fully moulded, originaly sold by Graupner, but in fact made in china by Launch Model (ex zoom model). The plane is beautiful and flies very well in addition to be georgous in the air. Hereafter are some picture I did.

Maiden flight of my Shinto went very very smoothly. I went to the col du glandon again because the weather forecast was indicating no wind or 5km/h maximum from west, south west. I was however expecting some thermal breeze created by the valley. when I arrived, the wind was coming from the north east valley. The time to walk to the slope, the wind stopped and switched to south valley. So, I drove 1 km, climb to the slope. The gentle breeze was about 4 to 5 m/s, not more. So I launched the Shinto unballasted and everything was perfect from the beginning: no trimming needed, CG fine, settings fine with the right amount of snapflaps, differential OK. Empty weight is 2103gr and CG is set to 86-87mm. The Shinto is very easy to fly, very precise, and manoeuverable on the ailerons. I found the flaps to work very well in thermal position and efficient in butterfly mode to slow down the plane (empty, that's right). The Shinto, as soon as it takes its speed is impressive and easy in turn, with excellent grip and EM capabilities. I need more flying time in various conditions, and some competitions to go further.


I captured my maiden flight with the GoPro. Here is the video of it. I know ... this is an ugly place for a maiden flight :) !!!

My 4 pages review of the V-Venture has been published in the July issue of Modèle Magazine.

Below are some pictures of the assembly of the Shinto. the LDS installation requires some attention as everytinh is very tight. The result is perfect, with no slop at all, removable servos despite they are bigger than recommended. In the fuselage I used the new HV 6125e from MKS, so the plane doesn't need any S-BEC, as I 'm powering it with a Li Ion 2S 2.9A battery.
Empty flying weight is 2100gr. I didn't need any lead except the one moulded and provided by Vladimir. I also produced a spreadsheet for the ballast. I found that above 1.7kg of ballast you need to put some balance lead in the nose as the CoG is moving backward of 3mm.