We often say that if you want a serious warranty and after sale service, including spare parts, don't buy in china, and prefer local and renown brand you won't be disappointed ... 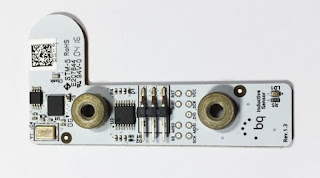 When I decided to purchase my 3D printer end of 2015, I choose to follow this recommendation and bought a printer proudly "made in Europe", in Spain to be exact, the BQ Hephestos 2.  And I purchased from BQ directly, not from a re-seller.

875 hours of printing later, and especially lots of printing since mid march 2020, after joining the Covid-19 protective shield making initiative, I started to have some issue with the leveling, until I was totally unable to print anything, as the auto-leveling was failing randomly, making the printer to not print on the plate, but in the space (Video at the end).

I did some checking and found that the inductive sensor boar was probably faulty. The problem is that the led was not working since few month already so I couldn't do any manual leveling or adjustment. I started to search the spare part.

I quickly found that no re-seller was stocking or selling this part anymore, the part being "discontinued" or "out of stock" everywhere.

So I decided to contact BQ directly. First the commercial department redirected me to re-sellers, 2 in particular, that I contacted over the phone with no result. They don't have in stock and cannot help.


I recontacted BQ Commercial 3D department, and explained again the situation, begging them for help to order a new inductive sensor directly from them.

I then received a mail from BQ 3D Support Team, this time asking for more details such as serial number, invoice, pictures, video showing the problem, etc ... which I provided the same day, telling to myself that this time in few days, I will be able to order the spare part and receive it, repair and restart printing.


But unfortunately, I was totally wrong. Since I sent them all the data/details and the video, I didn't receive any answer and have been totally ignored despite my reminders to both commercial and support department twice.

This is really disappointing and frustrating !

This inductive sensor board being BQ specific, I have no idea if I can replace it with a generic inductive sensor without damaging the printer (voltage, pin layout, sensor sensitivity, etc ...).

Moral of this story:  I paid my BQ Hephestos 2 (Prusa i3) printer 5 times the price of a Chinese Prusa i3 printer, and I'm now blocked because I cannot get any assistance from the manufacturer itself.

The worse is that this sensor is common to the 2 printer models BQ is selling, the Hephestos 2 and the Witbox 2, and that these 2 printers are still available widely, and in stock everywhere. This should means they still have spare parts available.

In conclusion, BQ is not a serious company at all, as they have absolutely  no consideration for their customers.

So If you are looking for a 3D printer, just forget BQ, they don't deserve any interest and trust from us. There are many other alternatives on the market, much cheaper, and with better printing quality, and at least, you will be able to find spare part more easily.

As we often say: "Forewarned is forearmed !" so now you are aware !