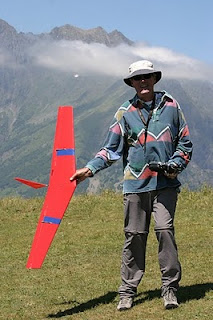 Yesterday, I met with Alain Zutter in corps and had the chance to see his new flying wing, the AZ2010.

Normally, every year, Alain is designing a new wing but unfortunately nothing in 2008 and 2009. Alain is back with an evolution of the section used on the AZ2007.

I piloted few minutes the AZ2010. The wing is pretty fast, responsive.