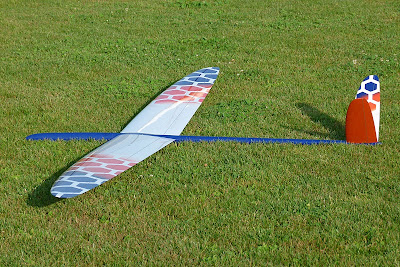 First particularity, wings come with RDS installed at the factory. You have the choice between MKS, JR, graupner wing servos. I choose to go with the MKS DS6125-mini. There is no servo bays on the wings. The green MPX connector is in place, and is located forward of the spar, which means that wires are probably routed through the spar.

My version is a spreadtow carbon version, for F3F. It uses rohacell, but next version will use Herex instead.
the ailerons are running out to the wingtips which is unusual, but which desmonstrated to be very efficient on the AlliajHM. We can expect a very crisp response of the ailerons. the ballast compartiment is behind the joiner box and is very long (about 27cm) and receive about 560g of brass ballast in each half wing.
The wings respectively weight 640g and 642g, ready to use. I choose a complex color scheme and Samba made it right.

The joiner is not very large, but very sick and stiff. It accepts brass ballast like most of the plane does today. 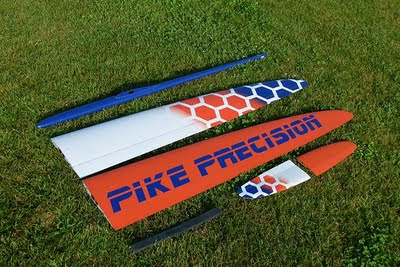 The fuselage is full carbon, including the front part of the nose. this is curious, but according to Samba, this guarantee an extreme rigidity. the compatibility to 2.4ghz is obtain by molding a flat part (~20 cm long) outside the fuselage to tape the 2.4Ghz antenna externally. Then, the nose cone is fiberglass and can be put in place without touching the antenna. The second antenna must be in the fuselage at 90°. V-tail joiner are in place. they are square, also a very nice detail. The elevator control rods are fiber glass and carbon. The ball clevise is already glued on the elevator side.

Few more words about the ballast. I don't know where is exactly located the CG, but I guess it is between the rear ballast compartiment and the joiner, and by mixing ballast, you can keep the CG at the same location. My brass ballast were not at the exact size, due to a mistake of the ballast provider. It is already at 1733g total, so the normal ballast weight is probably at 2000g.

The quality is absolutely superb, the airframe is very stiff and light. The wing surfaces are cleaned of any control rod or servo bays.
The plane assembly will be limited to the fuselage servo installation. It saves lot of time as the wing servo installation is often painful to do it right and properly.

i give you a link to the post I did about the design of the Pike Precision as reminder: http://planet-soaring.blogspot.com/2011/07/pike-precision-is-released.html