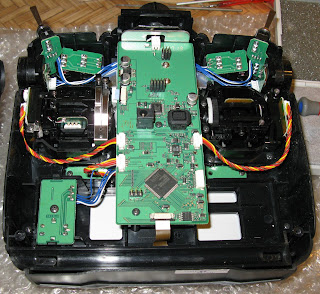 Apparently the problem is not new but the occurence seems to be much higher the past months. It doesn't affect all transmitters, but only some series.

On several french forums, a serious warning has been sent by T12FG/FX30 owners after several crashes conducting to the total destruction of the model after loosing the control of their model.

The issue is on the connection between the sticks potentiometer and the PCB. It comes from poor connector quality and the tension created of the wire a bit too rigid or short. Futaba/Robbe perfectly knows about this issue and know how to fix it. It is fixed by changing the wires and soldering directly instead of using connectors. In France the issue is fixed for free by the Futaba/Robbe repair center. The symptom is the following: on a empty new memory, neutral positions shift in the servo monitor menu, and also in some mixers.

Anyway, it is abnormal that Futaba/Robbe doesn't proceed to an official recall, considering the severity of the problem and the high risk to have an accident with injured people.