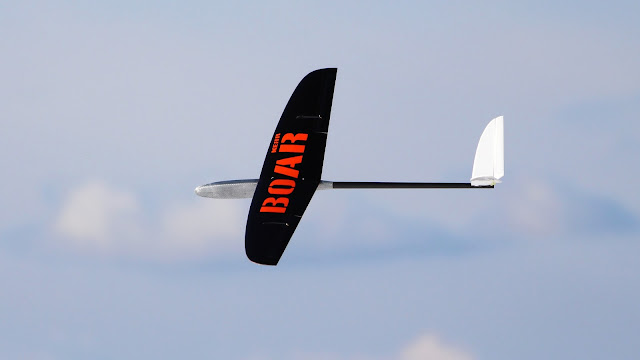 
I had the chance to receive a preserie kit for evaluation from Endre Kaposi (Kerr-Soaring team). This is not the final version of the Boar, as I know that there are some enhancements in progress, but the present test will give you a good overview about this new kids on the block. Let's have a look to the kit as it arrives. The main part is this one piece moulded wing, with servos installed, and pre-wired. Then there is a tiny and light fuselage made from silver color fiberglass, with an opening on the side (no nose cone or canopy). 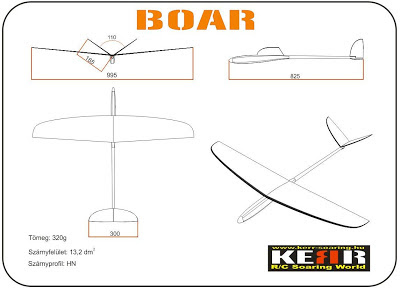 The boom is a conic carbone tube, similar to those we can find on HLG. The tailplanes are made from Balsa. The boar came with accessories like the control commands for elevator made from piano wire (0.5mm) in a plastic sleeve, fiberglass ailerons control horns, some screws, the control rod for ailerons, a small connector (male + femelle). Quality of the components is good. The wing is strong. Ailerons are articulated at the bottom and the servos were factory installed during the moulding of the wing.


I started by the V-tail. After assembling the 2 balsa planks for each half tail and its control surface, I glued the 2 half tails together with the right angle of 110°. At the bottom, I glued 2 triangular balsa sticks before to sand it using the fuselage boom and some sand paper to obtain the adequat rounded shape which is then glued on the fuselage with some epoxy. I sanded the whole tailplane, then covered it with some solarfim. I didn't use solarfirm or equivalent for ages, so it was like the first time, finding the right temperature of the iron, cutting with the correct margin, etc ... Once the tailplanes and the control surfaces are covered, I attached the control surfaces with blenderm as hinges to the tail. I continued with the front part of the fuselage and the wing fixation. After drilling the hole for the wing connector, I inserted the screw nuts provided on a small plywood plate, which is glue inside the fuselage at the right location, and dry with the wing in place to be sure of the alignment. While drying, I prepared another plywood place to receive the elevator servos. there are simply glued on this plate, with some wood block to immobilize them laterally. Then comes the stressing operation, but finally easy given the size of the glider to glued in place the boom. But before to do it I needed to install the plastic sleeves in the boom and immobilize them at several points using some foam. I decide to exit the sleev on the side of the boom on tailplane side.


Let's glue the boom now: Wing is in place, the Boar is on a table and I ensured that the wing tips were at the exact same height of the table to have a perfect aligment. Then I glued the boom in place, and measured the height between the table and the tailplane tips and obtain the same distance. This guarantee the perfect aligment between the tails and the fuselage + the wing. It is time to install the servo plate and the elevator control commands. After sereral check, I cutted the plastic sleev at the right lenght on servos side, then install the piano wire in them, do the Z shape to connect to the servo arms. The servos plate is then glued on the side of the fuselage, still accessible, but letting enough access to the nose for the batterie installation, or to insert the received under the wing. I forgot to say that the elevator servos are 2 x HS-45HB, and in the wing this is similar size servos from the same brand, but I don't know the reference.

To terminate the wing assembly, not much work to do, but however the operation needs some attention. I needed first to complete the wiring and connection to the receiver, in order to power the wing servos and make the servos to retrieve their neutral position as the servo arm is rotated to make it disappear into the thikness of the wing during the moulding.

I didn't used the connector provided, but used a modified 5 pins MPX grey connector. They are maybe a bit too big for the job, but easyer to solder. The ailerons brass control horn are glued in place in the ailerons with some epoxy, after drilling carefully in diagonal the aileron to receive it. the control rod is a 0.8mm piano wire, cut and bended at the exact length. The Z shape on the servos side avoid the command to disconnect. On the horn side, I immobilized using a small piece od plastic sleeve with an internal diameter of 0.5 mm. It is put in place on the 0.8 pianowire with some force. No need of cyano here.

On the rear side, I also finished by gluing in place the epoxy plate control horns and connect the piano wire, cut and bended at the exact length, directly to the horn without any clevises.

The final operation was to install the receiver, a 6 channels park flyer receiver, and the battery which is a 4,8V 300mAh 1/3 AA.

The CG location is at 72 mm from the leading edge, measure at the root. I needed 15gr of lead to balance the model right. The final weight is 345g, which is a bit more thant the 320 announced, but I'm not worried because it is still a lightweight glider !

I took the opportunity of a short weather window last week-end to do the maiden flight. Currently in the french alps, we have amazing accumulation of snow since the beginning of the winter, something like 6 to 8m depending of the altitude. But the weather was sunny on staturday, even it the wind was very low. Perfect conditions to fly the Boar rather than any other glider.

To be honest with you all, I was doing my job of tester that afternoon. My expectation was to pilot just another micro sloper like there are some on the market. What a mistake ! OK, the first flight was short and not conclusive because of too much throw at the elevator, a too rearward CG, and in addition some crosswind. After adding few grams of lead in the nose, and reducing elevator, I launched the Boar again and .... wow ! I have been bowled over by this micro sloper !

Cruise speed is high (HN section, 7,32% thickness and 1,5% camber ), and the gliding ratio is impressive for a small glider. The Boar is agile, stable, provide a good lift despite the low wind. When a Weasel was maintaining its heigh with some difficulty, the Boar was "travelling" everywhere on the slope, doing "F3F like" laps, reversals, rolls, looping, inverted flight.


The feeling when piloting the Boar is that you have a much bigger plane at the other end of the sticks. This is really suprising from a such small glider. Endre told me that the Boar was also light DS capable, so I tried. On the dark side of the slope, the Boar is his element, accelerating well, tracking well, with good manners and no bad habit.

Finally I flew the whole afternoon with the Boar, and enjoyed it a lot. It's like a micro F3F glider, agile and fast, flying in a small volume or covering reasonable distance easily. I definitively need to prepare a small ballast system and some lead to install in the fuselage, under the wing to increase the flying weight and increase Boar 's capabilities.

I have not yet explored the usual mixing with the ailerons like thermal position, airbrakes. It will be for the next time. But first impression is that the Boar is a very playful, appealing and dynamic glider. This is a real sloper that likes speed, aerobatics, and to be shaked ! In other words, the Boar is not boaring at all ! In addition the enhancements that are in progress will make this glider even more attractive with a wider flying envelop.

Nothing like a short video to illustrate words. So here is the video I filmed last week-end. For more info and details, you can contact the Kerr Team at the following emain address: info@kerr-soaring.hu