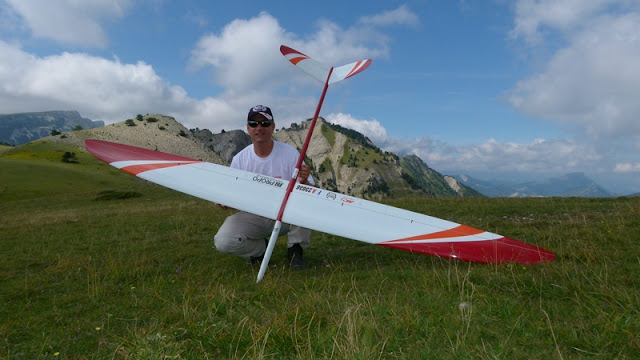 What a F3F championship !

Last week end was the 2013 F3F National Championship over 3 days. 23 pilots were qualified for it. Location was one of the 2 superb slopes of the south Vercors, with the cliffs of Fond D'urles in case of south wind, and the deep slope of le Col de Menée in case of north wind. Weather forecasts decided to give 3 days of North wind.
The slope is the ideal slope every F3F pilot dreams about. But there is a "but", you must deserve it with a 45 minutes walk and climb 200m of altitude during 1.5 km, from the car park. And we did this 3 days in a row !

On Friday, after reaching the slope around midday, conditions were very very light. After a first juge briefing with the CD, then a competitor briefing, we started the championship with a round zero allowing the pilots to discover the slope. Immediatly after, we started round 1. Until 5:30 we managed 4 rounds, in a light but straight wind. Everybody was flying with no ballast in order to fly at the edge and be able to do tight turns and stay in the lift at the edge. At the end of the day, I was leading the comp after winning 3 of the four rounds. Best time was abround 46 seconds.

Saturday, we arrived on the slope earlier, but had to wait a bit for the low clouds to clear. I think we started to fly around 10:30. We did 11 rounds during the day, with growing conditions, especially from the middle of the afternoon, therefore pilots start to use ballast gradually. At the top we could see alternatively Matthieu Mervelet, Allan Cohen or Frederic Hours or myself winning the rounds, but at the end of the day, Matthieu approached the lead with a nice 36s after I did a big cut at the left turn and finish with a 41s. Matthieu did it again in the 15th round with a 37s took the lead of the comp.

Initially Sunday was supposed to be the best day, with stronger wind and sun, but when we arrived on the slope we were standing in the cloud. We waited again until the cloud level increased. But round 16 was stopped then cancelled after 30 minutes with 10 pilots remaining. Bad news for me as I had the best time. We had to wait again until this time the cloud level was high enough to resume the competition. We restarted with round 16, and this time, after an excellent gain of altitude, I managed to do the fastest time of the competition, and of the slope, but more importantly retrieving the lead before the last round. For this last round everything could happen for the top position, but also for the 3rd place on the podium as Allan Cohen, Arnaud Krebs and Philippe Lanes were on the starting blocks to dislodge Frederic Hours of the 3rd place. It was a matter of 1/10 of seconds.Allan flew first with a 37s setting the objective for most of us. I was flying in the first 1/3rd of the pilot and did a nice 36s, anticipating at the limit all turns, taking the risk to cut. Arnaud was flying right after me and did a 42s. Later Matthieu did a 39s, which means I was champion !. Philippe did also a 36s, but this was not sufficient to jump in the ranking. Fred was the very last pilot to fly in this championship. He flew very aggressively his FS3 and obtained a 37s like Allan. But with the game of the jokers (2 jokers over 17 rounds), Frederic finally stayed at the 3rd place.

Overall it was an exceptionnal championship for many reasons: First of all the organisation whi splitted the CD responsability (Yves as contest director, with the help of Thomas Delarbre) and the logistics (Paul and Etienne and Gracinda) with the BBQ, the banquet, the price giving, without forgetting the admin part. This made the contest much smoother, with no stress on the organisation side. I think this has been much appreciated by the competitors.
I really want to say a warm thank you to the organisation including the base A and B plus safety line judges. You did a wonderfull and accurate job guys !
Then the slope made this championship special as the thermal activity was very low, flights were very equal. Finally the level of piloting was impressive. 10 pilots could reasonnably win this championship. So the battle has been very intense, therefore the victory is even more enjoyable !

Below is the evolutive ranking with also the list of the planes used:

Below is a video that Stéphane Ricobonno provided me. It is filmed from base A with a go pro, and gives a nice perspective on the slope.