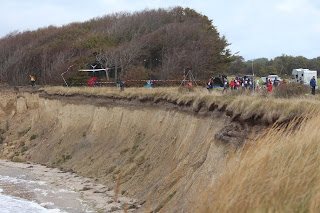 The F3x community is currently boiling  while discussing the topic about gyros on RCgroups. There are three camps: the "anti-gyro", the "pro-gyro", and the "I don't mind about gyro" camps.

How did it come on the table?

Suspicion about using gyros in F3x gliders started during the 2012 F3F World Championship in Rügen, Germany. For some pilots, the supremacy of the leading pilots was suspect. However, no protest has been written during the competition, but I heard that a claim deposit has been done later to the CIAM. At the end of the season, a German rule change proposal to ban gyros has been rejected by the CIAM. At this stage it was not clear if it was rejected because of a bad wording, because of a wrong place in the rules, or for some other reasons. Few weeks ago, some info came after an F3B competition that gyros were authorized, and that some top pilots were using them. As usual, if it is confirmed, people using gyros will stay quiet and not claim publicly that they are using it.

It is only recently that we understood that the CIAM was not in favor to ban gyro, because it was considering it as progress for the categories that could encourage young pilots to join. For example the answer from Tomas BARTOVSKY (CIAM's RC Soaring Sub-Committee) to the question (whether or not gyros are allowed in F3F or F3J by the Sporting Code) is the following: 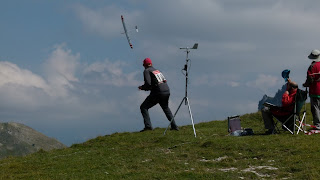 "The situation seems to be cleared after the CIAM Plenary Meeting this year. There was a German proposal for banning gyros in all classes except where the rules of the class allows them. This proposal was rejected. Many people expressed their opinion that young people love new technologies and therefore the gyros should not be banned. Nobody stated that the gyros are banned by the present wording.

The term "direct control" is not sufficiently clear for excluding all stabilisation systems, and if the clear banning of gyros was not accepted by the delegates, to my opinion the gyros are allowed for RC gliders."

And on the FAI website (http://www.fai.org/ciam-news/37176-main-decisions-2013-ciam-meeting) you can see that the debate around the question occurred (during the Friday evening’s Open Forum discussion at the plenary meeting) and that the position is rather clear:

"prohibiting the use of technical aids (gyros, telemetry etc.) when it was considered that most young flyers enjoy the use of such technology. Resisting change and remaining with long time existing regulations was seen as a barrier to new entrants"

It is not new that the F3F rules are plenty of "holes". Remember 2002 in Slovakia, where we discovered the diving. Of course it was not in the spirit, but at the end it was legal, and most of the other competitors tried to dive in order to stay in the race, myself included! I have in mind some particular other points like reflights, or groups scoring, but there are probably some others. In fact there are many things to clarify.

Then comes the question of fairness/equity, as this is considered by some people like opening the Pandora box to authorize gyros or any stabilization devices. According to them, we will soon see much more complex devices looking like autopilot, with waypoints, sensors everywhere, flight path optimization, etc … Of course this is not impossible, but certainly not from day one, and the CIAM can decide anytime to stop/control/block, just by defining clear rules.

Now, please consider the following question: are pilots equal during a competition even without gyros? Definitively not!  In all F3x categories I know competitors who have access to resources/tools/equipment (super computers, wind tunnels, CAM DAM, 3D computation, etc.) that others don't have. Some competitors work for the aeronautic industry, having deep knowledge in aerodynamics. They are able to design entirely a plane, build it, optimize it, etc.Some others have very tight relationship with manufacturers, so they have access to prototypes, or special layout. Is it a problem? From my point of view, no, because finally this is the dynamic of the competition. Competition is not only about comparing flying skills, it is in fact much more. This all makes the discipline to progress, and then all the evolution is being retrofitted in sport flying machine.

Gyro prices start at 17$ so is accessible to everybody (you can now buy a beginner plane with built-in gyro), at the opposite of the best F3x frames that are sometimes far too expensive or far too long to obtain. Ultimately, the only way to guarantee a total fairness would be to fly F3F on CRRCSIM simulator with the same plane, the same virtual wind condition. Is it what we all want?

Safety issue? I read on RCgroups some ridiculous argument saying that gyros are not safe on a slope because they may fail and they should therefore be prohibited. Today there are more risks to have an accident because of a radio failure or battery failure than a gyro failure.
Another big challenge if we decide to ban gyros is the enforcement of the rule. Today, for less than 100 euros, you can have an 8 channels receiver with built-in gyro, and even vario (despite telemetry is explicitly forbidden in the rules). How will the organizer check that, at any time of a competition? This is nearly impossible.

So what is next?

Personally, I fly slope soaring for 34 years, and F3F for 20 years. I have never used any gyro in my gliders. I recently purchased one for my electro airplanes (MPX twister, and Easystar for aerial photography).
I don't have any religion about gyros (I'm in the "I don't mind about gyro" camp). I've never felt the need of it, but on the other hand, 3 axis gyros are rather recent. Now I'm a competitor, and the simple fact to know that it is not forbidden to use a gyro in an F3x plane and that some pilots may have already used it or will for sure use it from now, made me take the decision at least to try. 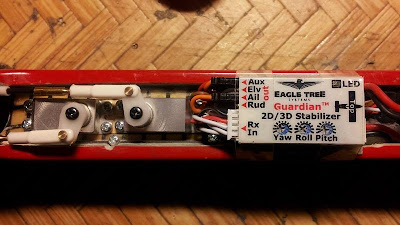 Hopefully, whatever the benefit of a gyro, it is easy and transparent to install or remove in a glider (except for the space it takes, considering the small place we have in the fuselage), and settings are totally independent of the radio settings.
If tomorrow the CIAM decides to ban gyro in F3F (note: for F3F any rule change decision in 2014 will take effect in January 2016 only), great, no problem. If it is the contrary, I will be ready, I will have experimented, I will know the PROS, the CONS, and the gyro will be correctly tuned. This is what we call COMPETITION. Am I wrong?

What I'm fighting for, is to have a clear rule that everybody knows in advance, not during the Team Manager meeting prior to the competition, stating that gyros are forbidden or are authorized. This is simple, can be done, as suggested by my Spanish friend Alvaro Silgado, as a simple local rule. But it must be announced in advance. Then I am convinced we will adapt.