Some feedbacks about the use of the Gyro at slope 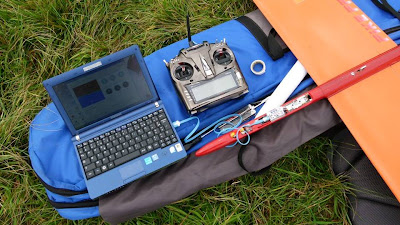 Below are my first feedbacks after trying the Eagle Tree Guardian gyro on my Pike Precision. It is mounted only on ailerons, all other servos are connected directly to the receiver. I did this for 2 reasons:

1/ Consumption: Without re-cabling everything, there is only one + and one - wires to power the gyro and the 4 servos behind the gyro. Given the consumption of the digital servos, I didn't want to take any risk.

2/ V-tail mixing. When using a gyro, the V-tail mixing MUST be performed by the gyro itself, and not by the radio. Therefore you loose the mixing/tuning features of the radio.

Last week, I did a first attempt that was a failure because my gyro had the heading lock feature enabled causing the glider to exit the bank and yank or EM turn by itself, like the beginning of a dynamic stall. I suspect the gyro to think on the 3 axis together and combine the reaction , and because I had only the ailerons connected, it created some side effect.

Anyway, for the second attempt yesterday, I applied the following settings

Flying conditions were very light, and I had to fight to climb. While thermaling, the glider was stable, but it is anyway without gyro, so no real difference. I played with the activation/deactivation of the gyro, and I didn't see real benefits.

For the second flight, I increased the gain to 60% on the potentiometer, and didn't touch other parameters. The glider was more stable, especially at cruise speed or at higher speed. But on another hand, it was very heavy at the sticks, like I had very heavy wings. It became a problem during turn exit because I needed more counter action on the ailerons. I suspect the gyro in the mode to

I landed in order to changed some parameters, and especially to active the "3D Rate Control" which seems to be a specific feature to the Eagle Tree Guardian, according to the use manual. With the mode enabled, the gyro translate sticks movement into angular rate. The objective is to keep the agility/responsiveness on the roll axis, while keeping stability.


Direct Rate 3D Control Submode
Unlike many other gyro stabilization systems, the Guardian employs Direct Rate 3D Control to translate your stick deflections to angular rates without forcing you to “fight the gyro.” With this feature enabled, the Guardian interprets your stick deflections as commanded angular rates and attempts to have your model follow those commands. This way, snap rolls and other high speed maneuvers are possible without compromising on stabilization effects.

So I ended with the following settings:


With these settings, I retrieved the agility/responsiveness on the roll axis. In rapid transition, the gyro was keeping the glider very stable, I had less correction to do. Turn exit were as before, without gyro.


In fact I notice that, in the gyro mode, the stabilization is lower at low speed, which is nos masking lift changes. The action of the gyro is visible at medium to high speed.

Now the real gain is, from my point of view, not determinant in the flying conditions I had. I think it will be more interresting to see it in stronger wind with turbulences. In that case the gyro will work more and be more visible on trajectories.

Another observation: While playing with parameters in the workshop, I noticed that increasing the refresh frequency was making the gyro more reactive. This is only possible when using digital servos, and it is important to check the frequency at which they work. MKS servos are at 333 Hz, so I have some margin when using 100 Hz. On the gain value side, I finished at 100% and didn't notice any oscillation in flight. It could be due to the fast refresh rate that make the reaction loop super fast.