When I first saw the picture of the Alula TREK, I found she looked like the Alula EVO, especially because the specs are very close if not similar. But in fact the Alula TREK is different on every aspect as we will discover:

What changed in the design ?


According to Michael Richter, DF (Dream Flight) worked on the following things with the new Alula TREK:

1) New airfoil: DF took what they learned from the EVO series and applied this to the new TREK series. They wanted to achieve trimmed flight with the elevons close to neutral position, at best glide. Both the evo designs always required a little trim to get it right. Basically, they took the best characteristics of the EVO airfoils and attempted to merge them, and at the same time thickness was reduced for the alula-TREK and camber was adjusted lightly as getting closer to the wingtip. This is very visible when comparing side by side the wing tip of the alula Evo and TREK, Alula TREK tip is thinner and the winglet is less prohiminent.

2) DF finessed the shapes and the thicknesses of the parts to reduce the volume so that they could use a little more dense foam for added durability. But this was a balance, since they did not want to affect the flight performance and style much. In the end these changes, in their opinion made the design better in flight too.

3) In addition to the airfoils, They made some slight changes to overall wing planform. Forward sweep angle was reduced slightly to reduce amount of noseweight, and the nose length was increased slightly for the same reason. The chord lengths are also a little different from root to tip than the EVO... a little less area at the tips, and with less wingtip up-turn. Elevon area has also been increased slightly, and the reduced hinge angle affects the flight and control slightly too. 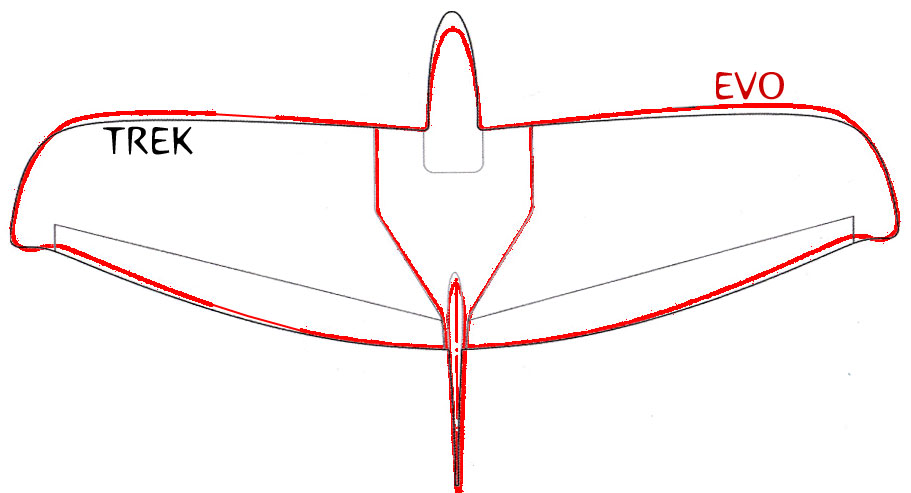 4) A small ballast compartiment at the CoG location allows to put 20 gr to 30gr of lead, to improve the behavior in the wind.


Let's have a quick look to the kit now. The nicely decorated carbox is now rectangular and make the storage of the Alula TREK easier, without constraint that could deform the wing after a while. The two wings are finished with the carbon spar installed and also the control horn in place. Same for the interlocking system, which is light and very convenient, or the magnets.

The central part of the Alula TREK is also nearly finished and need only the radio installation. The plastic belly skid provide a nice reinforcement of the nose, and allows; like on the Libelle to have a canopy to easily access the radio. The canopy is maintained in place by 2 strong magnets.

The fin and the print on the "fuselage" make the fixation thighter so stronger. A pocket with accessories contains the control rods ready to use, the clevises (same as the Libelle), the interlocking screws some velcro adhesive. Another pocket contains the stickers and transparent stickers

In term of moulding quality, I found it much better, with no mark of injection nozzle, nice edges. Details are better respected and the surface finish is also nicer.


In oder to give you a better comparison, below are some picture showing side by side some details:

Now, there is a canopy on the TREK:

Here you can see the better moulding quality on the TREK

the interlocking system is simpler, lilghter and more efficient on the TREK

Below the junction between the wing and the fuselage with the smart lip that lock the wing in translation, excellent idea !

On the left, no remaining work ! 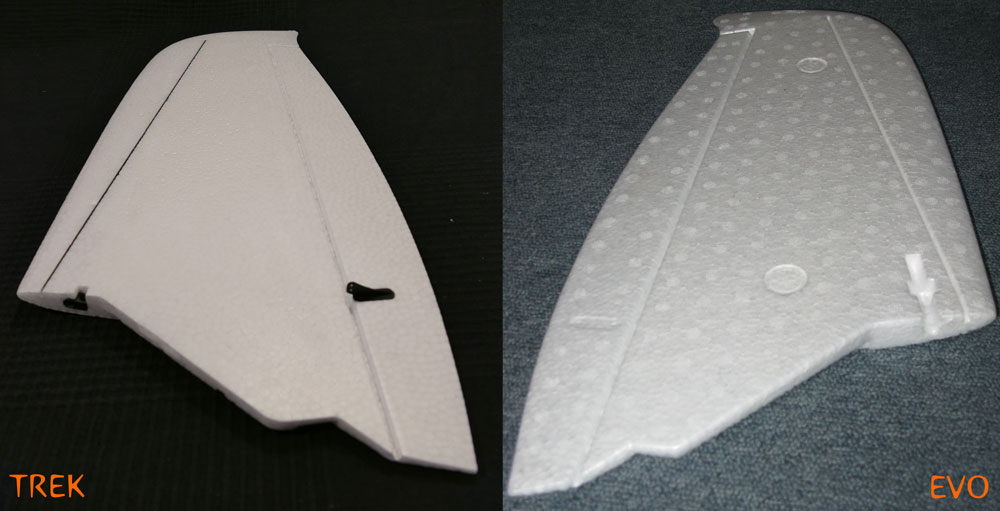 
This is the time you will need to assemble the alula TREK,  as everything that was requiring some glue on the EVO is already in place on the TREK. On the wing, the only operation consists is puttng the interlocking screw in place, so let's say 20 seconds for the 2. On the fuselage, this is also quite fast.

If you have the recommended servo or the one sold in option by Dream Flight, then after installing the servo arm in place, at the neutral position, you just need to insert them in their servo print, route the wire throught the wing until the receiver location. a transparent sticker is applied on the servos to secure it's mounting.

The front of the radio compartiment is moulded for a 300mAh, NimH, 4 cells battery. The battery receives some velcro, before to be place in the fuselage. The receiver, a 4 channels from FrSky (D4R) with 2 antennas is located behind the battery. I placed the 2 antennas toward the nose, on each side of the battery. considering that the Alula won't fly far from tme, the range is not a real issue, and the fact to not respect the 90° between the 2 antennas is therefore not critical.

Not included in the 30 minutes, the painting. I used some paper tape for masking, and an orange acrylic spray to paint.

I needed 5grs in the nose on the side of the battery to obtain the market CoG. Finished, my alula TREK weights 172gr. 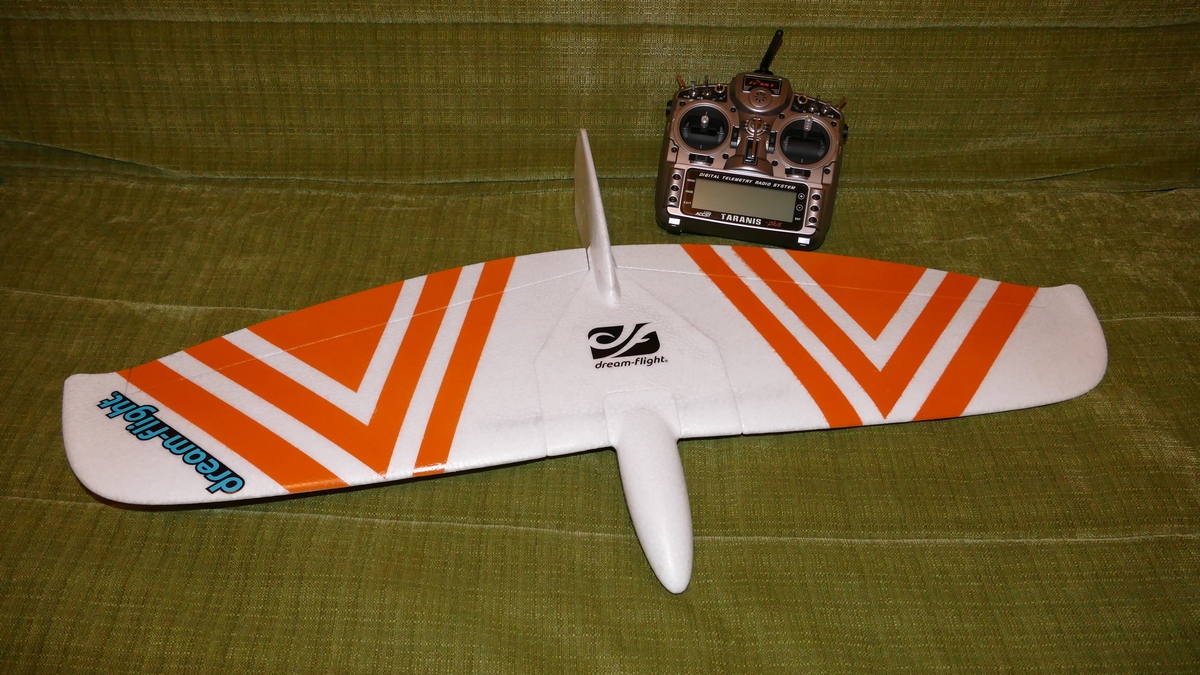 
First of all, I found the alula TREK easy to launch (PS: You certainly remember my great quality as HLG launcher at the end of a video about the Libelle ...). She is easier to launch because smaller, she takes the energy well, and you don't need a full armside  launch rotation to reach a confortable altitude allowing to glide, explore the field, or even catch a thermal ... yes yes, it can happens ! To obtain a better launch the Alula must be perfectly trimmed to not diverge and climb straight. the grip provided by the upperside and underside clear tape is satisfying considering you cannot "inject" the same power into the launch compare to a normal HLG.

In flight, what is immediatly noticeable is the natural speed which is high. At the field, it is better to let the Alula to fly. If you try to slow her down the sink ratio increases quickly. In the air, she is demonstrative and indicates the lift or sink air very well. Of course she will not be as competitive as a HLG in this excercice, but she is more than good enough to enjoy it !
Compared to the Libelle, she is easier to launch, has a higher cruise speed but sink ratio is a bit higher, so where the Libelle can come back to be hand catched, the Alula will miss it by few meters from the same distance.

At the slope the Alula TREK is a joy to fly. It looks like she borrowed some ADN of the weasel as she is fast, agile, and like to play. The Alula EVO was very sensitive to proper setup, and this is apparently not the case with the TREK !
The looping is easy, and nice, when it was nearly impossible with the EVO, looking most of the time as a "comma" if she had not enough speed and energy.  With the TREK, you can chain them without any problem which indicate that she doesn't dissipate her energy quickly. The roll can be quick or slow depending of your settings. With 10mm of ailerons, the roll rate is fine, but is more confortable with 13mm as indicated in the user manual. Inverted flight that needed a backward CoG on the EVO is a simple task with the TREK, even with a "out of the box" CoG. The Alula TREK penetrates well the wind, and with the small ballast compartiment where you can have 20gr (metal) to 30g (lead) of ballast, it is even better.

At the landing the wings have a tendancy to open rotate, so even if the magnet secure the wings well in flight you can add a bit of Blenderm tape underside on the junction to avoid this.
Several friends borrowed me the Alula TREK, either at the field or at the slope this week-end. They liked a lot and all said: "Wow ! there are noticeable improvements over the Alula Evo" for those who still have one.

Overall I found the Alula TREK better in all compartiments, thanks to a wider flying envelop. Therefore she can be flown more often in various conditions from no wind and pure thermalling to light breeze with the same joy and same smile on your face.

From my point of view, Dream flight succeeded to propose us a revisited Alula, reducing the assembly time, improving her flying capabilities to satisfy even more people. It is easy to guess that this alula TREK will be another best seller considering how big was the success of the previous version, and how much the new one is awaited !