The survey ended few minutes ago and gave interesting results. Thank you all for your participation to the survey !
Before to comment the results, it is important to mention that the survey concerned mainly Europe, and especially France as you can see on these per country statistics for last month. 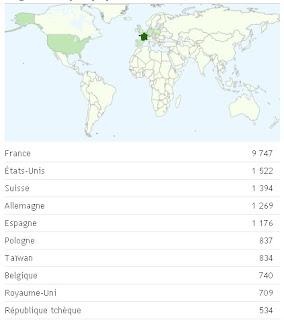 Let’s now have a look to the results: 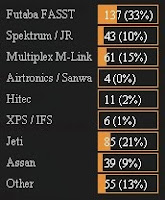 Without surprise, Futaba FASST arrives in first position. FASST has been introduced at the beginning of the 2.4 Ghz, as the first FHSS system, and appeared to be reliable from day one apart few recall concerning the sensitivity to the temperature of one receiver chipset. But if Futaba represents 1/3 of the market, things could change quickly if they are not releasing the telemetry which is today the major weakpoint of their offer.

The surprise is the second rank of Jeti. Jeti was not particularly reliable with their FM receiver, but their 2.4 offer is pretty well designed, reliable, and Jeti is the very first brand to propose and deliver telemetry and various probes, not only “dream-ware”. With Jeti, telemetry is real ! Jeti is very much appreciated in the glider world. Weak point is that Jeti offers only modules and receivers, no transmitter. But they officialy announced a transmitter family for beginning of 2011.

In third position another surprise with MPX, which is very new on the market compared to some other brand. But despite a late arrival, MPX reaches 15% of the market. They offer a home made 2.4, not relying on industry chipset. As MPX is used widely by glider pilots, most of them migrated to 2.4 within the same brand.

Then we find Spektrum followed closely by Assan. Spektrum is more used by helicopter or airplane pilots, but less by glider pilots. One of the reason is the poor possibilities of the spectrum transmitter. Maybe the recent DX8 will change things. Assan, on his side is taking advantage of their aggressive pricing to take some market share. But the current trend is that Assan is slowing down because of the lack of telemetry and also transmitter. They are probably hitted by the recent progression of FrSky who proposes aggressive price AND telemetry with the interesting analog probe input on the receiver that allows to develop his own probe.

It interesting to see that “Other” represents 13% of the market. In Other we find Weatronic who recently left Graupner after the introduction of the HoTT system. We find also FrSky, and some other alternative brands.

Hitec remains marginal, which is a surprise as the Aurora 9 is a nice transmitter with plenty of Glider capabilities. In addition the Hitec 2.4 appears to be a reliable system. XPS/IFS is also marginal.

Finally Airtronics/Sanwa suffers a lot of a very poor representation/distribution in Europe and especially in France. For example, the French distributor (scientific france) is inexistent. I know that Airtronics is very popular in US and the SD10G is a good transmitter to use for gliders.

This picture of the 2.4 market will change drastically in the coming months as the war will reinforced. It will be interesting to do another survey in one year, in order to see the evolution.
- December 20, 2010