Last week-end was the 2011 edition of Font D'Urles, a competition from the French league, but a bit apart because of the place and flying conditions. Font d'Urles is offering lot's of cliffs, facing south and working only thanks to the thermal activity.

This year, we went to a new site, called the "collet", which is a very promising site because providing a ventury effect, improving both turns.

On Saturday, we (38 pilots !) spend the afternoon on the slope witing for the thermal breeze to start. unfortunately, the light north wind won over the thermal activity, so no round was completed.


Sunday, weather forecasts were saying that we would get some south wind, so everybody was ready before midday. We startet the first round around 12:45 with slow time around 50s. But the thermal activity grown progressively, so we achieved faster time. I won the second round with a 35,56s.

Third round went to Reto Blumer, the most frenchy of the swiss F3F pilot. He did a blistering 32.11s with his Cyril before to dammage it at landing. The fourth and last round went to Jean-Luc Foucher, the designer of the Alliaj with a very nice 34s.

We were expecting bigger and faster condition, possibly to beat a record, but it remains that this site is easier to access (shorter walk), safer for landing, and less impressive because the cliff is not that high. 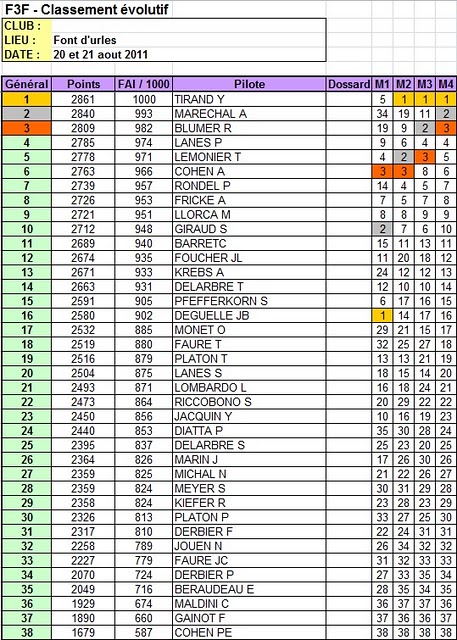 A big thanks to the organisers, first for obtaining the authorisations to access this site which is very controlled by the eco-guards, because of the wildlife in the area. Secondly for the logistics itself, making this contest a moment apart of the F3F season.

I will edit a short video clip with the interresting video sequences I shooted during the week-end. Stay tuned !