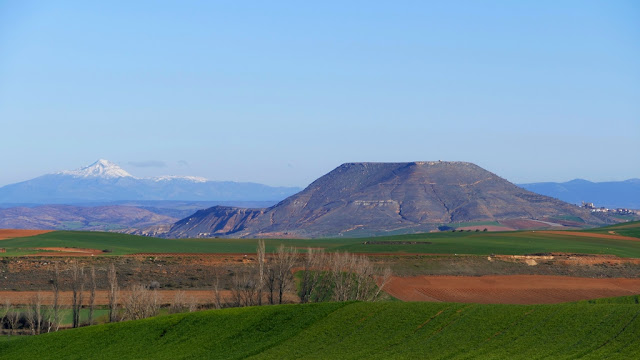 After 21 years, La Muela is now for me a sort of pilgrimage. 1200 km from my home, but nice country with very different landscapes, very nice people, good food. This year I took some more days before the contest to visit Madrid and Aranjuez.

I also could have a practice day befoer the contest. Hopefully, I could arrive early because then the wing dropped, then raised, before to become crossed from the left. I could manage 2 hours of practice with my 2 Shintos.

Day 1 at La muela, and very challenging condiitions for the organisers. We installed the camp on the north slope before to move around midday on the south slope, start a round, stop the round, cancel the round, then move to the west slope and manage 2 rounds in very variable condition with some cross wind from the left. On the slope we can also follow because the organiser installed a Wifi router to conect directly to a web page and load the result few seconds after the end of the round. This is great !

Day 2: Despite the weather forecast was not encouraging we could complete 4 additional rounds on the south slope light to very light conditions (4m/s to 8m/s). Best time of the day is Gerardo I think with a 49s. The ranking has changed at the top with Carles Aymat taking the lead followed by Alvaro Silgado. I falled to the 3rd place but not far from the lead. As we say in french, "I eated by black bread" today, and flew a very nice 73s joker including a cut, with no ballast at all in the plane. Tomorrow will be the jugement day as conditions should be nice with more wind, still from south. Miguel told be he would like to do 6 additional rounds. Below few pictures taken today.

Day 3: The wind started slowly around 11am then raised progressively until we got massive air around 3 pm. We could do 7 rounds, so a total of 13 rounds. Some big thermals popped up time to time on top of the big air (between 11 to 15 m/s I think, as the anemometer was behind the edge). Alvaro Silgado, who flew consistently well, won the competition logically, followed by Carlos Cantero who started the contest with a zero flight after hitting the edge during the first round. I finished third after staying second for a while and fighting to go up, but I didn't get THE big air that could allow me to do a sub 40. Congratulations to the winner and also many thanks to the organisers for the excellent job during the 3 days ! La Muela remains THE contest to be at Easter ! See you next year !

Below is my photo album. For some of them, I used my 4K photo feature of the Lumix FZ1000 and it is so easy to catch the right instant and save the picture.

Also below a nice video clip, thanks for sharing Carlos !