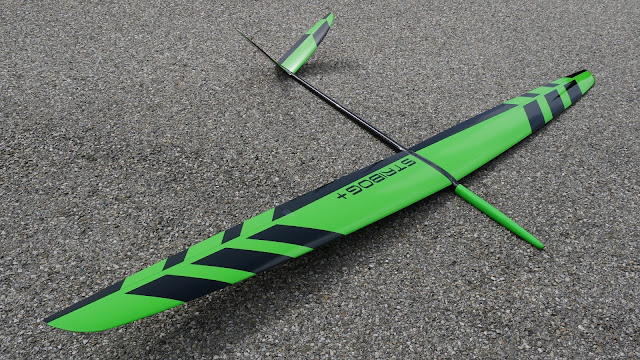 The flagship from RTGmodel (http://www.rtgmodel.sk/) has just received some evolutions and is now renamed Stribog+.

The main changes are the slim fuselage that is no more hosting ballast, and the apparition of a wing compartiment in the wings. Planform and airfoils of the wings remain the same and the tails is not modified.

Ballast for the joiner (628gr) and for the wings (1627gr) is provided and now allows to reach 2.2 kg compared to the 900gr of the Standard Stribog.

Moulding Quality is still second to none and some details have been added, like the servo tray front lips that are going up to remove the potential fuselage failure under the canopy. Component weight are the following:

As a reminder, the Stribog is a very competitive and capable F3F plane. I have flown my unofficial personnal best in 26.21s with it.